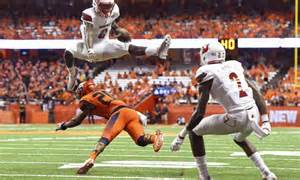 Louisville’s sophomore quarterback Lamar Jackson has been stunning the college football scene so far this season.

He’s the type of player who’s hard to hate and gives 110 percent in every play. In week four, even the Marshall fans (his opponent for that week) were lining up for autographs. A 1971 graduate of Marshall told ESPN he traveled over ten hours from his home in Kansas City, Missouri just to see the magnificence of Jackson.

Lamar would lead his team to a victory and personally have 417 yards and five touchdowns.

Jackson surpassed twenty-five touchdowns in only the first four games this season; faster than any other quarterback in history. Jackson also has more rushing yards than any running back in the league and leads the Heisman race.

Jackson’s teammate, Deangelo Brown, said, “He’s not really all in the party scene, he’s not really in all the flashes. He’s just a guy that loves football, loves to have fun, loves to win.”

However, he believes he can play better. After scoring five touchdowns against football powerhouse Florida State, Jackson gave himself a D grade due to his one interception and seven incomplete passes. In his crushing victory against Marshall, an F due to nearly twenty incomplete passes. Jackson believes for every interception he throws, he needs to score four touchdowns to make up for it.

Louisville head coach Bobby Petrino told ESPN, “He’s a great competitor, and sometimes when you’re a great competitor, things eat at you. The things that absorb your thoughts are the mistakes you make, the ones you just miss. Sometimes you forget about all the really good plays and the great things you do.”

Jackson’s blinding speed, incredibly strong arm, and ability to leap over competitors are part of the reason former Louisville scout, Lamar Thomas, recruited him. Jackson only wanted Petrino’s promise to keep him at quarterback. He told his soon-to-be coaches that if he were to win the starting position at Louisville, “he’d take it to the next stratosphere.”

In week five however, Louisville suffered a 42-36 loss to Clemson. Jackson never gave up and brought his team back from a 28-10 deficit at half. Despite the constant pressure by Clemson’s defense, the young quarterback gave all he could and finished with 162 rushing yards, 300 passing yards, and two touchdowns.

Former Louisville offensive coordinator, Gerrick McGee, said to ESPN, “He was just thinking about what we had to do to win. And that’s what separates him from anybody that I’ve seen. It has nothing to do with him and his success. He just wants to win. It just so happens that to win he’s going to score five touchdowns.”

McGee went on to describe his former quarterback as “Michael Jordan in shoulder pads.”

That innate ability to shake off every bad play and move on is a big part in his success. Jackson’s always smiling and joking with teammates on the sidelines, it’s only once the game is over that he analyzes his mistakes.

Jackson said in an interview with College Gameday, “I stay on the path of maintaining. … If you try to, like, dwell on that like you’re the man or something, good things won’t happen to you.”

If Jackson continues down this path, he can surpass Colt Brennan’s (University of Hawaii) FBS record of  sixty-three touchdowns in a season with two games to spare.