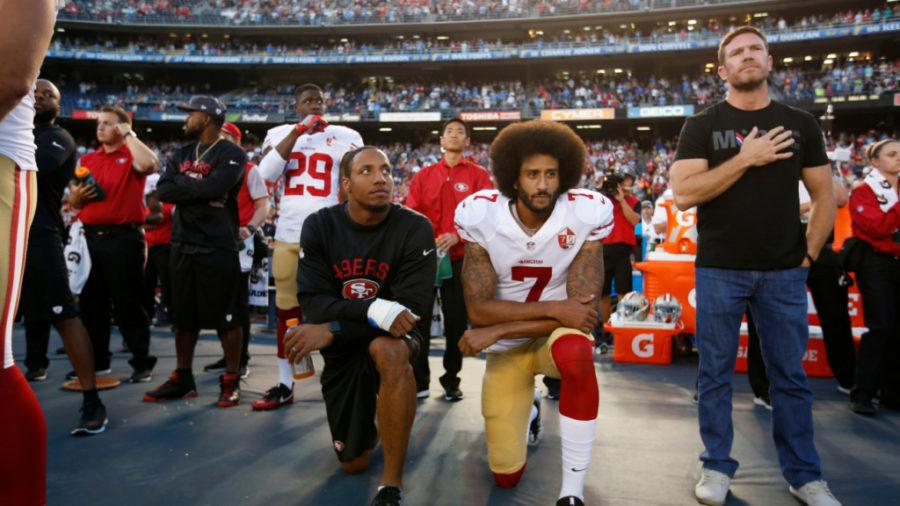 There are many social issues that our country faces today. One of them involves the mistreatment of Africa Americans and minorities.

Colin Kaepernick, the backup quarterback for the San Francisco 49ers, is passionate about the issue and is trying to call more attention to it. Kaepernick is doing this by not standing during the national anthem before games.

It all started on August 14, 2016. This was the 49ers first preseason game of 2016. He began his protest that day, unnoticed by the media. The 49ers next game came on August 20. Again, he did not stand. Finally, on August 26, their next game, Kaepernick began to receive national attention for his behavior.

His main goal is to give a voice to people that aren’t being listened to. He spoke to the NFL media after the game on August 26, and said, “I am not going to stand up to show pride in a flag for a country that oppresses black people and people of color. To me, this is bigger than football and it would be selfish on my part to look the other way. There are bodies in the street and people getting paid leave and getting away with murder.”

On September 1, Colin Kaepernick continued to not stand during the anthem, but this time, he was joined by his teammate Eric Reid, a safety for the 49ers. Before the game, Kaepernick met with Nate Boyer, former Green Beret and NFL long snapper. Ultimately, he plans to kneel down on one knee during the anthem instead of sitting. Boyer believed that this would be more respectful toward the military. Kaepernick said that he was going to donate 1 million dollars to charities that focus on racial issues after the game.

Also, on that same day, Jeremy Lane, a cornerback for the Seattle Seahawks, sat for the national anthem before his team’s preseason game in Oakland. He was the first non-teammate of Kaepernick to not stand during the anthem. Lane wants to stand behind Kaepernick, and he will continue to protest until he feels like justice has been served.

Before the last NFL game of the 2016 preseason, Brandon Marshall, a linebacker for the Denver Broncos, showed his support for Kaepernick’s actions by taking a knee during the national anthem. According to the Denver Post, Marshall loves his country, but believes that something needs to change, “I’m not against the military. I’m not against the police or America. I’m against social injustice.”

During the first Sunday of the NFL regular season, there were a noticeable amount of players who protested. This was not an ordinary day, though. It was the 15th anniversary of the 9/11 terrorist attacks of 2001 on the U.S.  The significance of the day made it much more emotional. Players from the New England Patriots, Kansas City Chiefs, Miami Dolphins, and Seattle Seahawks received attention by their demonstrations.

Additionally, the Kansas City Chiefs players linked arms with each other during the national anthem. Seattle Seahawks players did the same thing before their game in San Diego.

On Sunday Night Football, Martellus Bennet (tight end) and Devin McCourty (safety) had their fists in the air after the anthem to show their support of the Kaepernick’s efforts and to raise awareness of the social issue.

Lastly, before the Monday Night Football game between the San Francisco 49ers and Los Angeles Rams, Kaepernick and Reid took a knee for the anthem, while Rams’ players Kenny Britt (wide receiver) and Robert Quinn (defensive end) stood with their fists in the air.

Kaepernick’s behavior has gained national attention. People have mixed opinions of the effort. Republican Presidential Nominee, Donald Trump, expresses his opinion about Kaepernick in an interview with Dori Monson on KIRO radio in Seattle: “I think it’s personally not a good thing, I think it’s a terrible thing. And, you know, maybe he should find a country that works better for him. Let him try, it won’t happen.”

Kaepernick plans to continue his efforts until he sees noticeable change in our country.