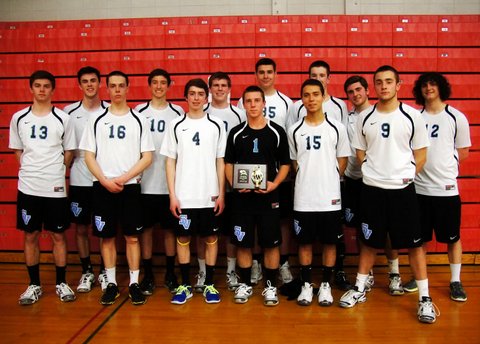 On Saturday April 6, the Seneca Valley boys’ volleyball team traveled up to Meadville for their annual tournament.  The team had just come off of two wins in a row over North Hills on the previous Tuesday and Shaler on the previous Thursday.  The goal for the team was to keep the momentum going through the next week during which the Seneca boys would face North Allegheny.

The day started off with a round of pool play in which the Raiders would play the other 4 teams in their pool twice.  Then based upon their record the teams would be ranked and put into the playoffs.  Playoff games would just be one game to 25 points.

After being off for the first couple hours of the tournament, the Raiders first two opponents were the small schools of Cambridge and Fort Lebeof.  Both of these teams were easy for the Raiders to defeat in a quick fashion.  However the Seneca Valley volleyball team knew that the rest of the day would not be as easy as those two games.

Next the Raiders played a fellow section member the Butler Golden Tornadoes.  Immediately everything that the Seneca team had worked on throughout the season immediately began to click.  Playing some of the best volleyball of the year so far, the Raiders were able to shock their fellow section team and crush them in both games by more than 10 points in each game.

Once the team started to click it carried over for the rest of the games.  In the final game of pool play Seneca faced Cochranton who has been known as one of the best teams in northwestern Pennsylvania.  TheRaiders were able to win the two game series and become the number two seed overall in the tournament.

After a first round bye, Seneca Valley replayed Cambridge and with the momentum from before they were easily able to blow right past them and face Butler once more in the semifinals.

This time Butler was more prepared to face the Raiders.  Both sides came out with lots of intensity and determination to win.  Even though both sides wanted the win, the Raiders pulled away late in the game and won.  With the win they advanced to the championship game against the tournament host Meadville.

After 10 hours of straight volleyball, the championship was in their sights.  Meadville was unwilling to give up their championship so easily.  The entire game went back and forth with neither team having more than a 2 or 3 point lead at one time.  Finally, Meadville scored two points at the very end winning the game 25 to 23.

Even though the Raiders came in second in the tournament, things started to look up for the Seneca Valley Volleyball program.