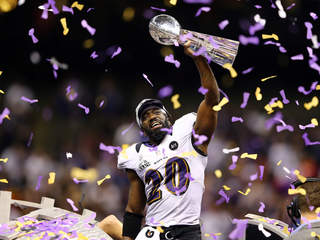 Legendary Ravens linebacker Ray Lewis was on top of the football world at the turn of the century, and 12 years later in his final game, he’s back.

The game featured the prestigious San Francisco 49ers franchise against the relatively new Baltimore Ravens franchise. One team has ended the season on top five times, the other team once.

One team had Hall of Famers such as Joe Montana, Steve Young, and Jerry Rice.  The other had a lone Hall of Famer, Jonathan Ogden, who was elected to the class of 2103 just hours before the game.

Once the game kicked off though, all that was history as the Ravens got out to a quick start. At the half, the purple and black had a lead of 21-6 as Ravens quarterback Joe Flacco threw three touchdown passes, and San Francisco kicker David Akers knocked through two field goals.

Anyone who tried to follow the halftime show performance by Beyoncé would have been in a tough situation, but Baltimore answered the call.

On the opening kick off of the third quarter, Ravens return man Jacoby Jones tied an NFL record with a 108 yard touchdown just minutes before the Superdome lights blacked out.

For 34 minutes, the game was delayed as NFL and Superdome officials tried to figure out why half of the lights in the stadium simply just went out.

Following the blackout, the 49ers came out and scored two quick touchdowns and Akers added another field goal and the what seemed to be a blowout turned into a game once again.

In the final quarter of play, Ravens rookie kicker Justin Tucker added two field goals, and 49ers quarterback Colin Kaepernick scored a 15 yard touchdown and the score was 34-29 with a few seconds left.

Backed up deep in their own end zone and forced to punt with just seconds remaining, Baltimore punter Sam Knoch ran around the end zone for eight seconds before taking a safety, leaving the 49ers with just four seconds for one last play.

On the ensuing free kick, Ted Ginn Jr. was brought down, and the Ravens celebrated their second Lombardi Trophy in franchise history.

Kaepernick finished completing 16/28 passes for 302 yards and a touchdown and one interception, and also rushed seven times for 62 yards and a score.

Both teams head into the off-season with their own agendas. For the Ravens they have to resign their Super Bowl MVP, and deal with the retirement of Ray Lewis and wait for Ed Reed to make a decision on his playing future.

The 49ers will have to examine their quarterback situation as Kaepernick stole the starting role from Alex Smith, who is expected to ask for his release.