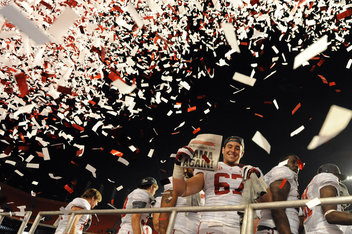 Alabama took its second consecutive BCS championship on Monday night in Miami when they played top-ranked Notre Dame and won 42-14. This championship is their third in four seasons.

Notre Dame had allowed only two rushing touchdowns all season leading up to the championship game. The Fighting Irish was the first team to reach the BCS championship game after starting the season unranked.  Alabama fans seemed outnumbered at Sun Life Stadium by Fighting Irish followers, ready to see their team try to win its first national title in 24 years.

Lacy landed one more blow with 31 seconds left in the half. McCarron dumped off to Lacy, who spun off two tacklers, and went 11 yards to make it 28-0 before half time.

The Fighting Irish started the third quarter with a promising drive that ended with another Alabama highlight. HaHa Clinton-Dix made a sensational diving interception, grabbing a tipped pass and tapping his toe inches from the sideline. Alabama turned the game’s first turnover into another long scoring drive.

The Fighting Irish of Notre Dame didn’t score until they were down 35-0 late in the third quarter.

With the score 35-0 and some Fighting Irish fans in the stadium record crowd of 80,120, Notre Dame finally got on the board with 4:08 left in the third.

After the game Coach Nick Saban had this to say: “I guess I’d just like to say how proud I am of our team and everyone in our organization for the great job that they did this past year, our coaching staff, our support staff, the university community, Coach Moore, president, chancellor, everybody at Alabama, including our fans. They’ve been very supportive and helpful in helping us be successful. I think the players appreciate it”.

Many of the Notre Dame players had comments after the game “We’re a good team, but we’re not good enough to win a natty yet,” said Irish  tailback George Atkinson, referring to a national championship. “We’re going to  take this as motivation for next year. The seniors did a good job taking us this  far, we’ve got to take it to that next level.”