Seneca Clashes with the Titans 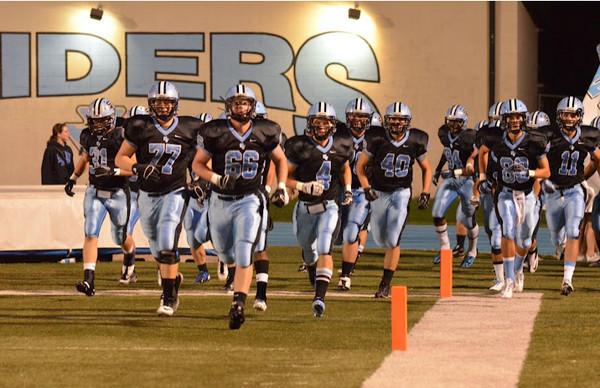 The Seneca Valley Raiders varsity football team improved to 5-1 with their dominating victory over the Shaler Area Titans Friday night under the lights in Nextier Stadium.

From the opening kickoff, the game was never in doubt: the Raiders were in control from the start.

The Raiders scored on a 12 yard run from senior halfback Forrest Barnes in the first quarter to gain an early 7-0 lead after sophomore Chad Izenas knocked down the extra point.

Barnes finished the game with 104 yards, crossing the century mark for the fifth time in six games.

The second quarter is where it got ugly for the Titans, and the rout was on.

The Raiders connected for four touchdowns in the second quarter of play, two of which came on connections of 46 and 25 yards respectively from senior quarterback Jordan Brown to senior wide receiver Jonathan Dorogy, including a sensational full extension catch by Dorogy.

Brown finished the game completing 9 of 10 passes for 193 yards and three touchdowns.

Senior tight end Ryan McCauley also got in on the scoring action when he caught an 8 yard touchdown pass from Brown and Barnes also found the end zone for a second time in the game on a two yard run which came late in the second quarter.

Brown hit  McCauley for a two point conversion and put the Raiders up 35-0 at the end of the first half.

Dorogy found the end zone for a third time on a rush of 18 yards in the second half, and sophomore half back Mason Dehart  scored on an 8 yard run for the final score of the game for the raiders.

Brown said about the offense “We have been working well as a group; we are like a well-oiled machine! Our chemistry is at its best and our offense is playing unstoppable.”

The defense also kept rolling with a dominating game.

The stingy Raider defense earned their first shut out of the year and held the struggling Titan offense to under 100 total yards of offense giving up 89 passing and just 10 rushing yards.

Senior linebacker Carson Kessler said about the defense “We felt we kept the momentum rolling from the game against Central Catholic and finally got the shut out we were looking for. We are playing well as a team and will continue that throughout the regular season and into the playoffs.”

The Raiders and their dominating defense look to extend their three game winning streak against North Hills Friday in their second away game of the year.

With a win vs. North Hills and a North Allegheny Tiger win over Central Catholic, the Raiders would secure the number two seed in the Northern 8 conference, and the second home playoff game in school history.