The City of Light: Paris is attacked 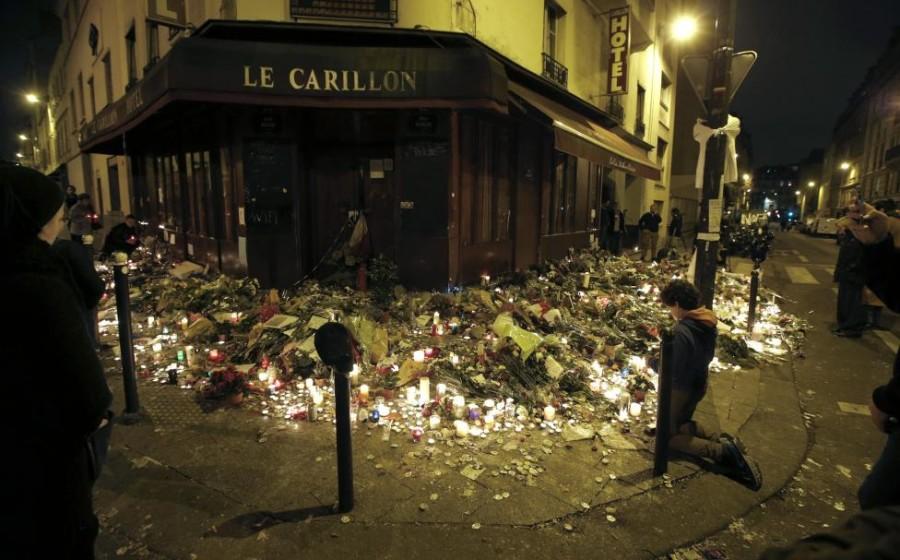 People pray outside Le Carillon restaurant, one of the attack sites in Paris, November 15, 2015. REUTERS/Jacky Naegelen

Friday, November 13, France’s capital faced an attack organized by the Islamic State where shootings and suicide bombings led to the deaths of 130 people and left 352 wounded, Reuters reported.

According to PBS Newshour, the attacks begun with the Petit Cambodge Restaurant on Rue Alibert, as well as several other cafes throughout the city, as gunmen armed with Kalashnikovs shot through the windows which resulted in the death of 37 people.

The attacks continued at the Stade de France where approximately 80,000 people were watching soccer match between Germany and France. Three suicide bombs went off around the stadium, but because the crowd thought that the noise was nothing but fireworks, the match continued, The Associated Press said.

Despite atrocities already committed, they were all but over as an attack struck the Batlacan concert venue which sits a crowd of 1, 500 people, PBS Newshour reported. At least 80 people were killed in the attack as fans of Eagles of Death Metal, the band playing, was faced with tragedy.

According to the BBC, when police were finally able to breach the building, three attackers had blown themselves up and another was shot by the police.

PBS Newshour reported that in total six locations around the city were attacked.

French President Francois Hollande, who was at the Stade de France when it was attacked and was escorted out, defined these attacks as an “act of war” and declared a nationwide state of emergency, deploying 1, 500 military personnel to do so, and to reinstitute border checks and imposed a curfew to restrict foot and vehicular traffic” as PBS Newshour stated.

Overall, eight attackers are dead. Seven of these attackers committed suicide using an explosive vest while one of the was shot by French police. A few of the attacker were identified to be French nationalists, however, French police said to have found a Syrian passport. As PBS Newshour reports, this was later confirmed by Greek officials as they matched the name on the passport to a Syrian migrant who had arrived to Leros, a Greek island, six weeks prior.

While the people of Paris deal with the horrible attacks they faced, the world went to social media to show their support as people began to use the hashtags  PrayforParis, #JeSuisParis and #PorteOuverte to show a grieving people that they do not stand alone.

As PBS Newshour reports, numerous world leaders went on to offer their condolences to France in such a heartbreaking time and informed them that they would support them in anyway they could.