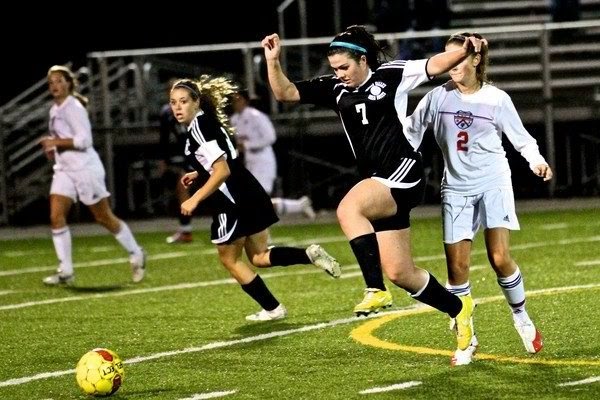 Misha Demchuk, seen here, charges down the field with the ball.

As one of the three team captains, Misha plays a big part in the success of the girls’ soccer team and has helped them to secure a second straight section title, their third in four years. With a record of 19-1-0, the Lady Raiders have rolled into the WPIAL finals against Peters Township with a +40 goal differential (51 goals for, 11 goals against).

Misha plays center-mid and is a four year letterman for the soccer team as well as 2011 and 2012 All-Section performer.

After the winter has come and gone and the snow melts, Misha is right back on the field; this time as a lacrosse player where she is a four year starter and a four year letter winner.

Misha has also earned Lacrosse MVP for the 2010 and 2011 seasons, as well as being given the honor of 2011 All-Section for lacrosse.

The second part to being athlete of the month is your performance off the field and in the classroom where Misha is even better.

Misha has received the honor of being named to the Highest Honor Roll for four years, as well as being named an Academic All American.