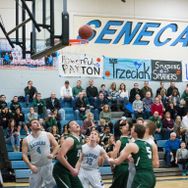 Significant, monumental, and pivotal are the best three adjectives that could describe what went down at Seneca Valley this past Friday, February 3.

Two teams trending in nearly polar opposite directions were set to clash in the William Paul Gymnasium in Harmony, on the campus of Seneca Valley.

The Pine-Richland Rams entered the game with a 9-0 record in the WPIAL 6A section one division, while having an overall undefeated clip of 19-0.

On the spectrum’s other end, the Seneca Valley Raiders came in with a 4-5 record in sectional play, and were sitting with a modest record of 11-8, as noted by MSA Sports.

MaxPreps notes that the teams had previously met on January 10. At Pine-Richland in Gibsonia, the Rams jumped out to a 24-7 lead at the end of the first quarter, and they never looked back en route to an 82-60 win over the Raiders.

On Friday, the Raiders prepared for the second-to-last home game for their seniors, including Nate Trzeciak, Payton Skalos, Patrick Uher, and Justin Koken.

With the way Friday night’s contest started, it seemed like it would be a repeat of the initial meeting. Pine-Richland led by eight points at the end of the first quarter by a count of 20 to 12. At halftime, the Rams led by a score of 31-28.

Then, as the second half began, the tides completely turned and all momentum (backed by the benefit of home-court advantage) shifted towards Seneca Valley.

A 42-point second half, primarily powered by a 26-point fourth quarter put the Raiders in an excellent position to close out the home finale.

On their senior night, Seneca Valley shocked Pine-Richland by a score of 70-56, dealing the Rams their first loss of the regular season.

Patrick Uher, one of the seniors on the squad, assisted in leading the way as he notched 14 points.

In their next contest, Seneca Valley put up a good performance against rival North Allegheny, but ultimately dropped the contest by a score of 54-52.

It is now win or go home for the Raiders, who will either clinch a playoff berth with a win against Butler or surrender the final spot to the Golden Tornadoes with a loss.

Regardless of the outcome(s) throughout the rest of the season’s course, Seneca Valley caught the eye of all of WPIAL by knocking off the Pine-Richland Rams, a first for any of the Rams’ opponents this season.