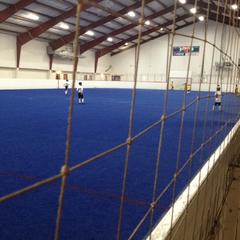 As the Western-Pennsylvanian weather begins to deteriorate into bitterly cold temperatures, entertainment in Butler County and Beaver County begins to move indoors. And no where is this more apparent than at the Tri-County Indoor Sports Complex in Freedom, Pennsylvania. A new indoor soccer season is set to go underway this week and is sure to involve a plethora of Seneca Valley students of all ages.

The arena has been a staple in indoor soccer for Seneca students for decades now. Teams with players as young as six years old play on the same turf as juniors and seniors in high school, and boys and girls play alongside each other in some of the leagues. Players not from Seneca Valley also join the fray; schools like Mars and North Allegheny add a fair share of talent to the player pool as well.

2015’s season is sure to be one of Tri-County’s best to date. The first session of games, which is set to last until late in the winter season, will tentatively have a whopping total of 136 different teams playing in eight different age groups, according to Manager Mark Perry’s preliminary information. Coaches were told that these eight age groups would be further divided into over 20 different divisions.

Each 48-minute long game is divided into two, 24-minute long halves of play. Each team playing lines up a five position players on the field, plus a goalkeeper. This 6 vs. 6 style of play leads to lots of fast-paced offensive opportunities and yet requires quick-witted defensive awareness for the squad playing defense at any given time. The 12 game session will surely see its fair share of flashy play.

And with the first matches taking place on Friday, October 23rd, players and coaches are prepared to strive for the top of the standings this season. Dozens of Seneca Valley High School students are ready to take the field on the stadium’s now iconic blue turf, and even more younger players hail from other Seneca schools. The Seneca Scout had the chance to interview Seneca Valley Junior Keegan Lahm about his team’s involvement in the Tri-County season.

Keegan plays as a forward for an Under-18 team entitled the “ILL Eagles Football Club”, and this year will mark the second season that Lahm has played for the squad. When asked what his favorite part of playing at Tri-County is, he said that playing in the Friday night games was what he was most looking forward to. He also believes that his team will improve on their performance from last year, stating “I truly believe that we are sure to win the title. We look very strong this year.” Lahm also added that he believes that “IEFC” has “assembled a good squad this year and the team’s new recruits look to be in good form.”