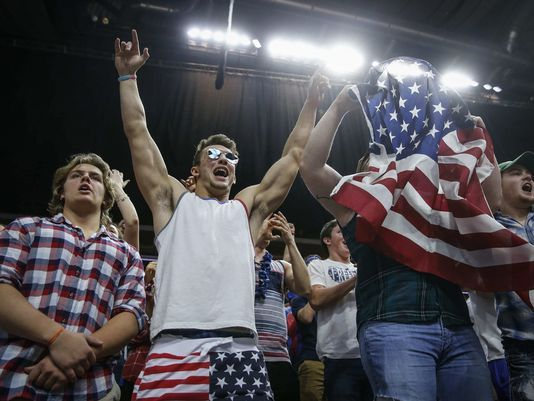 The story seems ridiculous at first glance; how could anyone be offended by a patriotic student section? Valley High has been defended by many outside sources, who agree that the theme has nothing to do with antagonizing anyone and that “North” is being too sensitive and turning something that is not political into an issue that they can be the victims of.

Headlines have been filled with politics being forced into every aspect of life recently, and this is not the first time that the Valley student section has utilized a USA theme (they have done so against other teams as late as this past fall). Football fans at Seneca Valley dress up in red, white and blue every year to support their team without any issues.

But the story quickly becomes more debatable when one considers that Des Moines North High School is commonly known in the area to be more diverse than Valley, according to CBS’s local news source KCCI. North students and (especially) parents believed that their Valley intentionally mocked their students that are members of refugee families.

Some social media reports even indicate that blatantly derogatory chants were heard coming from the Valley student section at the game. The chants, which would theoretically be indefensible, supposedly included racial and ethnics slurs. And according to the Des Moines Register, Valley High School has had problems with racism within their own student body in the past.

No one can truly and objectively decipher the intentions behind the events that transpired. It is certainly not morally wrong at all to simply wear one’s nation’s colors proudly, but at the same time no one should be directly antagonized when doing so. So it would seem that the Valley fans were not mistaken in their actions, provided no chants that included slurs or hate speech actually transpired.

But Valley High School sent an official apology to Des Moines North, stating that they were sorry for offending their respected opposition. Granted, the apology itself did not condone the USA theme, but Valley still realized that their actions were taken the wrong way and took the proper steps to address what had happened.

It’s hard to imagine a similar controversy occurring at Seneca Valley, but a lesson can still be learned. Issues can arise from practices or traditions that are very close to home.