The Women’s March Leaves Its Mark 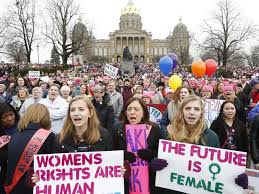 There were over a hundred marches around the world, all in which were coordinated to protest against the unfair treatment and their desire to protect the laws and rights of the female population. Considering the huge following on social medias and around the world, it’s evident these women are determined to have their voices heard.

Seneca Valley sophomore Katie Clark went to the march that was set up in Pittsburgh. She was there from 10:20 in the morning to two in the afternoon and originally heard about the march from her mother days before. Katie decided to march because she felt it was important to show her support and beliefs in equality for men and women. Along with that, she wanted to fight for her rights as a woman and prove they cannot be overshadowed.

Everyone was called to march for a different reason. A New York mother marched with a doll to represent her young daughter Rose. Leslie Synn’s reason for marching was, “I couldn’t imagine her being a teenager and the country still be in a debate whether she has the right to control her own body.” Among the almost three million marches, it is guaranteed there are even more people with the same reason to march as Leslie’s.

Every person joined in to create a voice that was sure to be heard. In Australia, chants like these ones, “Women united will never be defeated” and “When women’s rights are under attack, what do we do, stand up, fight back,” were billowing through the streets and many more places had their own creative yet powerful chants.

Numerous celebrities even showed their faces at the marches. Some celebrities that took a stand for their rights were Katy Perry, Chrissy Teigen, Miley Cyrus, Madonna, Amy Schumer, Cher and countless others, all with their own motivation to march. Most of the celebrities took to twitter or Instagram to express their desire for equality to all and to show their support to the rest of the marches they walked alongside with.

The United States of America truly showed how united we can be on January 21. The Women’s March was so successful in creating a voice that it is said to be the largest protest in United States history. As we move into a new chapter of our lives with Trump as our president, it is important to know that forever and entirely united we stand and united we are strong.