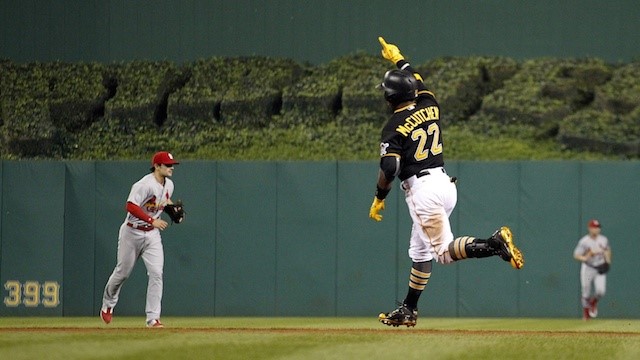 Since his drafting in 2005, it is not even a question that Andrew McCutchen has been a face of Pittsburgh, Pennsylvania.

He joined the Pittsburgh Pirates on June 4, 2009, to assume center field responsibility for the Pirates, as mentioned on Pirates.com. Since then, Cutch has done nothing but provide for his team, his fan base, and his community.

To start, from a statistical perspective, McCutchen is one of the best hitters in the Major League Baseball since his career’s conception. He has amassed 1,304 hits, 720 runs, 175 home runs, 637 runs batted in, 160 stolen bases, a .292 batting average, and a .381 on-base percentage.

McCutchen’s 21 home runs, 84 runs batted in, and .317 batting average helped lead the Pirates to their first winning record and postseason berth since 1992. They defeated the Cincinnati Reds in the National League Wild Card Game and pushed the top-seeded St. Louis Cardinals to the brink in the National League Division Series before ultimately being eliminated.

McCutchen was awarded that year by being recognized as the National League’s Most Valuable Player. This was an award he could share with his family in Fort Meade, Florida, his teammates and community in Pittsburgh, and his fans all around.

2014 and 2015 produced very similar results. A combined 48 home runs and 179 runs batted in put the undermined Pirates back into the Postseason in each of those seasons, although they were eliminated in the National League Wild Card Game in both seasons.

Then came 2016. McCutchen, clearly revered throughout Major League Baseball, hit a rough patch and was an ultimate factor in why the Pirates failed to reach their fourth consecutive postseason. His batting average dropped from .292 in 2015 to .256 in 2016, and his fielding metrics were credited as some of the league’s worst.

In this current off-season, McCutchen has become the center of the baseball world. It hasn’t been due to to his community activism or his influence on Pittsburgh, but rather because the Pirates’ frivolous owners are considering not distributing the money necessary to keep their franchise face as a cornerstone of the team and city.

Stepping aside from all of that debacle, it should be noted that various faces of Pittsburgh have had a say in pursuing management to keep McCutchen in a town that loves him with all of their heart.

On his weekly morning radio show at 93.7 The Fan, Pittsburgh Steelers quarterback Ben Roethlisberger hinted at the fact that McCutchen should remain in Pittsburgh, as noted by the Pittsburgh Post-Gazette. He was quoted as saying, “I should start this off by saying, let’s keep Cutch in Pittsburgh. He should be a Pirate for life, that’s just my opinion. He’s a good guy and a great player and let’s keep him around.”

Whatever happens in the coming days, weeks, or even years will not dictate anything that McCutchen has done for this city and its residents.

Whether he remains a Pirate or is pushed elsewhere will do nothing but make a city appreciate what a ballplayer, and an ever better civilian, Andrew McCutchen has been for Pittsburgh.

There will never be another one like Andrew McCutchen.