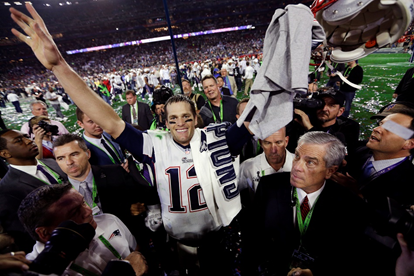 Although they are the Patriots, they are the team that almost everyone in the United States of America (not including the New England states) absolutely loves to hate. Why is that?

Because they are really, really good, and they will continue to be for years to come.

Tom Brady, the Patriots’ star quarterback drafted in the sixth round of the 2006 NFL Draft has proven throughout his entire career that he is an elite National Football League quarterback. The 17-year veteran out of the University of Michigan, through week eight of the 2016 season, has collected 59,347 career passing yards, 440 career passing touchdowns, and four wins to have the Patriots sitting at 7-1 in ’16, as noted on ESPN.com.

Brady and Belichick have teamed up to lead the New England squad to four Super Bowl titles in their 17-year partnership, and here is why they will capture their fifth together at NRG Stadium in Houston come February.

For starters, the experience is right in front of every critic’s face. This team should never be considered out of any game or playoff race, whatever the circumstances may be. The core group featuring Brady (quarterback), Rob Ninkovich (linebacker), Devin McCourty (safety), Stephen Gostkowski (kicker), Rob Gronkowski (tight end), LeGarrette Blount (running back), and Julian Edelman (wide receiver) has been through the ups and downs of the Patriots’ franchise, and they have all proven they are worthy and critical franchise cornerstones, especially come playoff time.

Additionally, Bill Belichick is to never be doubted in any case whatsoever.  The man is a pure genius, and even when an occasional hiccup hits the Pats, Belichick is always there to keep spirits high–even though his sketchy demeanor may make it seem otherwise–and get the Patriots back on the path that they and the Foxboro community have come to expect out of leader:  the winning path.

To add on to that, the Patriots’ depth is hard to be matched by anyone in the National Football League. When Tom Brady was suspended for four games to start 2016, Jimmy Garoppolo and Jacoby Brissett teamed up to lead the Patriots to a 3-1 record.

At running back, LeGarrette Blount holds the fort, but other backs such as James White, Brandon Bolden, and Dion Lewis have skill that is hard to match in many aspects. Danny Amendola and Julian Edelman, best known as receivers, have also flexed themselves as punt returners.

With the unquestioned skill and leadership of Belichick and Brady, the mastermind coaching, and the untouchable, undeniable depth of the Patriots, it is nearly certain that the New England community will see at least one more Vince Lombardi Trophy back in the streets of Foxboro.