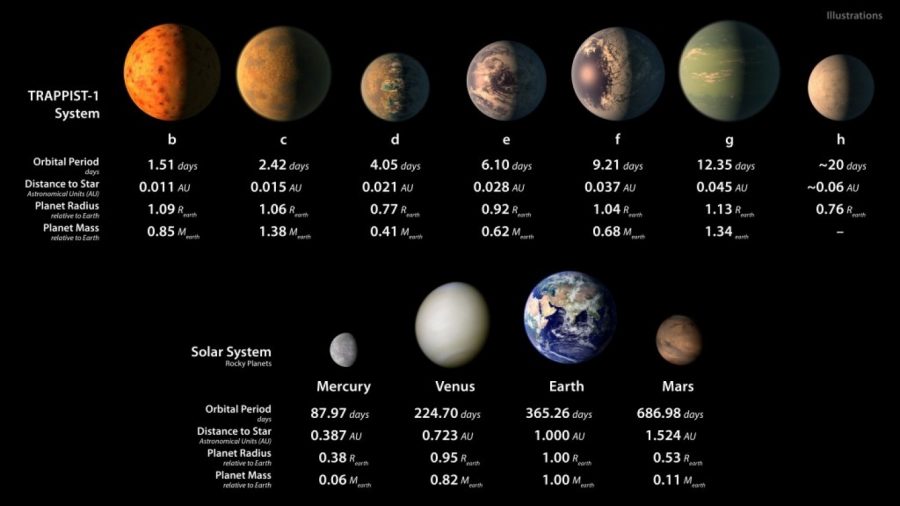 Researchers have recently discovered seven Earth-sized planets orbiting around a star at about 40 light-years, roughly 235 trillion miles, away from our solar system. The system is in the constellation Aquarius and it is referred to as TRAPPIST-1, named for The Transiting Planets and Planetesimals Small Telescope in Chile.

Two of the planets were found in 2016 by the Belgian operated telescope in Chile and with the assistance of NASA’s Spitzer Space Telescope five more were discovered in the following months. According to researchers, the TRAPPIST-1 system is the first known system with seven Earth-sized planets. It is also currently possesses the largest amount of habitable-zone planets to be around a single star.

Based on the planets calculated densities, they are predicted to have rocky surfaces and all seven could possibly contain liquid water given the right conditions. There are three planets from this system that are in the habitable zone and they are being observed to see if their atmospheres are made mostly of hydrogen, which is typical for gaseous planets like Neptune.

The planets are orbiting so close to each other in the TRAPPIST-1 solar system that if a person were to stand on one of the planets they could potentially see geographical features or even clouds on another planet that would be bigger in the sky than our moon.

There is a possibility, according to NASA, that the planets are tidally locked to their star, “…which means the same side of the planet is always facing the star, therefore each side is either perpetual day or night. This could mean they have weather patterns totally unlike those on Earth, such as strong winds blowing from the day side to the night side, and extreme temperature changes.”

NASA is launching a new telescope in 2018, the James Webb Space Telescope, “…with much greater sensitivity, Webb will be able to detect the chemical fingerprints of water, methane, oxygen, ozone, and other components of a planet’s atmosphere. Webb also will analyze planets’ temperatures and surface pressures – key factors in assessing their habitability.” Webb will be a key piece to determining if the planets orbiting the TRAPPIST-1 star are habitable.

Astronomers are fascinated and ultimately shocked by the discovery of planets so close to our solar system with such promise for habitability. Research will continue for years to come and the knowledge we have of TRAPPIST-1 will only grow from here.