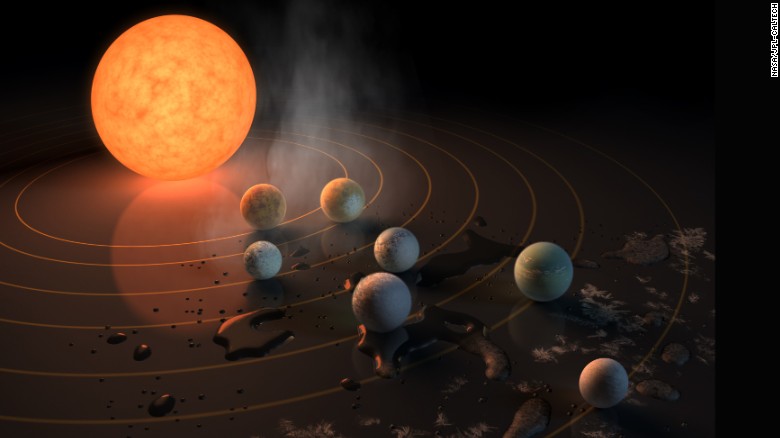 Just forty light-years away, astronomers have discovered seven new planets that all seem to be about the size of Earth. The discovery was first published in the science journal Nature on Wednesday and has since been announced at NASA during a conference.

The planets are all very unique and special because they all feature mild climates that could possibly sustain water and life, and are just outside of our solar system.

The lead author and astronomer on the discovery at the University of Liege in Belgium, Michael Gillon, told CNN, “This is the first time that so many planets of this kind are found around the same star.”

Based off of the planets’ masses, it is predicted that they are rocky with three of the seven being suitable for possible life. These three planets are named TRAPPIST-1 (the name for the dwarf star in which they orbit) e, f, g, and have a good chance to possibly feature oceans on their surfaces.

The discovery was made with a TRAPPIST  (TRAnsiting Planets and PlanetesImals Small Telescope) telescope that allows the user to notice variations in light or brightness from stars and such, and the Spitzer space-based telescope. Minor eclipses were noticed by Gillon’s team that is known as transiting, a major indicator of a planet. Two of the seven planets in the system were discovered last July, but until now the other five were unknown.

Although relatively close on a astronomical scale, forty light-years away would still take millions of years for humans to reach. The discovery is very important because it is seen as the best chance we have at finding life beyond Earth.

Sean Carey, manager of NASA’s Spitzer Science Center at Caltech/IPAC in Pasadena, California, said in a conference, “This is the most exciting result I have seen in the 14 years of Spitzer operations. Spitzer will follow up in the fall to further refine our understanding of these planets so that the James Webb Space Telescope can follow up. More observations of the system are sure to reveal more secrets.”

Amaury Triaud, a study author and astronomer at the University of Cambridge, told CNN, “I think we’ve made a crucial step towards finding if there is life out there. I don’t think any time before we had the right planets to discover and find out if there was (life). Here, if life managed to thrive and releases gases similar to what we have on Earth, we will know.”

Many researchers and astronomers believe that the key to discovering life on other planets comes with finding gases that allow life to thrive in a planet’s atmosphere.

“This discovery could be a significant piece in the puzzle of finding habitable environments, places that are conducive to life. Answering the question ‘are we alone?’ is a top science priority, and finding so many planets like these for the first time in the habitable zone is a remarkable step forward toward that goal,”  said Thomas Zurbuchen, associate administrator of NASA’s Science Mission Directorate, during a conference.

Since the discovery, many have been wondering what it would be like to live on one of these planets. Gillon responded to these questions with, “If you were on the surface of one of these planets you would have a wonderful view of the other planets. You wouldn’t see them like we see Venus or Mars, like dots of light. You would see them really as we see the moon. … You would see the structures on these worlds.”

The reason why these planets would be so visible is because of the sheer proximity of each planet to one-another. The innermost and outermost planets in the system are thirty times closer than Venus and Earth. This is possible because the ultra-cool star they all orbit is two-thousand times duller than the sun, allowing for a tighter orbit.

Scientists plan on researching the planets’ atmospheres over the next decade, determining if they could support life.