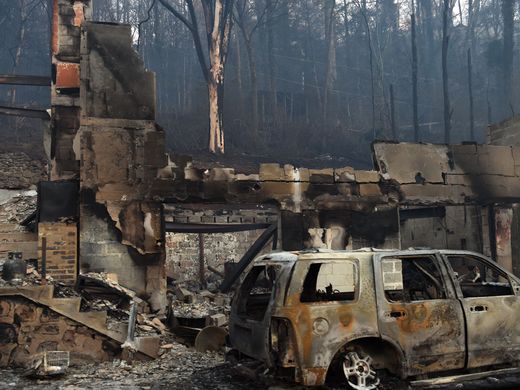 Last week, a wildfire that began near Chimney Tops Trail in Great Smoky Mountains National Park spread to Gatlinburg and Sevier County, Tennessee, causing approximately 700 buildings to be reduced to ashes and more than 14,000 people to evacuate. Authorities estimated that 17,000 acres have been burned since the fire sparked.

The cause of the fire is under investigation but Dana Soehn, a National Park Service spokeswoman, stated it was possibly “human caused”. It began in the national park and was blown by nearly 90 mph winds into Gatlinburg and surrounding counties. Over 200 firefighters have come from as far west as Memphis and are being aided by a National Guard helicopter that releases water from the sky in an effort to stop the blaze.

The number of missing persons is unknown, however as of December 2, 13 casualties have occurred. Officials say they have not been able to identify any of the victims. Sevier County Mayor Larry Waters stated that about eighty people were injured in the past week and many of them have been released from the hospital.

“Our search and rescue teams are going out house by house … there’s a few areas that we were unable to get to on Monday night because of the swift nature of the firestorm … and we’re finishing those up today … right now, search and rescue is our main challenge,” Waters told CNN on Wednesday.

According to the American Red Cross, by Wednesday night the head count at emergency shelters had fallen to about 240 people due to most displaced people staying with friends or family.

Dolly Parton was raised in the county that the fire hit the hardest and created the Dollywood theme park and resort around that area. Her park was evacuated as a precaution but in the end was unaffected. Nonetheless, she is establishing a fund to raise money for her hometown and create hope for the hundreds of people who have lost their property.

Parton’s My People fund will use her foundation and company to provide $1,000 monthly to every family affected by the disaster. She stated, “We want to provide a hand up to all those families that have lost everything in the fires and to recover … until they can get on their feet,” Parton then added, “It is a blessing that my Dollywood theme park, the DreamMore Resort and so many businesses in Pigeon Forge have been spared.”

Cassius Cash, the national park’s superintendent, stated, “In my 25 years of federal [park] service, I’ve participated in many fires, but none of that could have prepared me for this.”