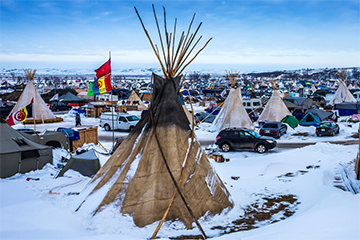 Over the past six years, Sunoco Logistics have been responsible for over 203 crude oil leaks, a statistic that is higher than any of its competitors. Some news sources and individuals find it’s unreasonable for the Standing Rock Sioux tribe to be protesting the installation of the Dakota Access pipeline because they believe the water will be unaffected. However, with even a chance of a rupture occurring, the tribe and 17 million other Americans’ drinking water is placed in jeopardy.

The Energy Transfer Partners and Sunoco Logistics are constructing the 1,170-mile pipeline that, in their plans, will go under the Missouri River. Although on Sunday, December 4, the Army Corps of Engineers denied permission for the Dakota Access pipeline to be completed. The protesters, or water protectors as they like to be called, celebrated their victory that halted all current work on the matter.

Since the starting of the protest, over 300 North American tribes have united with the Oceti Sakowin or Sioux Nation in an effort to demand that Native Americans should be protected and so should our country’s water supply.

In the activist camp, there are strict rules prohibiting weapons, alcohol and drugs, and supporters entering the camp are searched for such items to ensure everyone’s well-being and that the protest remains peaceful.

This week, at least 2,000 veterans traveled from across the United States to gather with the water protectors and act as a type of “human shield” to stand between the peaceful demonstrators and law enforcement. The police have tried time and time again to get the protesters to permit the pipeline being built.  They use mace, pepper spray, tear gas and water cannons on cold nights to discourage the tribe.

Several police officers became so disgusted with how the Native Americans are being treated that they joined the protest. Michelle Bloker, a former Wallowa County, Oregon police officer, explained her opinion: “I am horrified … people praying, voicing their views and heart, were met with disdain and a level of force exceeding what was needed. Instead of mediation and active listening engagement, protectors were met with stout commands and ‘lawful orders’. I felt a sense of profiling.”

Activist Nicole Fantl who supports the Standing Rock Sioux tribe stated, “This fight will end when we see the end of the outdated fossil fuel era, when this greed and destruction has been replaced by the sanity of sustainable systems that honor our earth and its people…”