Sailors freed from cruelty at the hands of Somali pirates 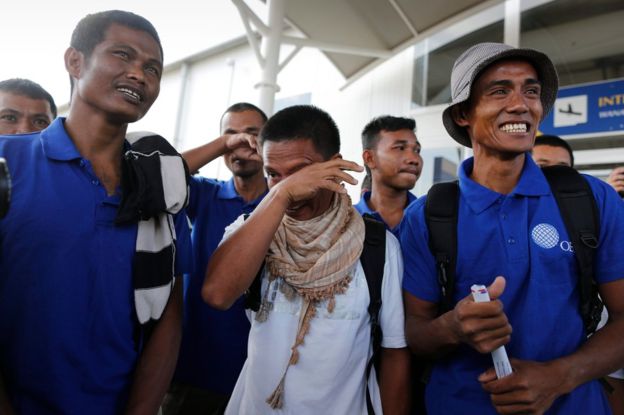 Last Saturday, 26 Asian sailors were freed from the imprisonment of Somali Pirates after four and a half years of torture and enduring inhumane conditions, a British law firm raised money to fund the rescue orchestrated by Oceans Beyond Piracy, an American non-profit organization.

The pirates accepted a small portion of the money they had initially sought after in exchange for the sailors’ lives. Negotiators communicated with tribe elders to agree upon the sum they would provide as ransom. In the end, the pirates received enough to cover the cost of holding hostages for 1,672 days. It is speculated that the ransom paid was 1.5 million dollars, however a specific figure has not yet been confirmed.

“The pirates were uneducated, obstructionist, unmotivated and unrealistic… They picked poor fishermen from poor countries from poor families. They were dreaming about huge amounts of money they were never going to get,” stated Leslie Edwards, the head negotiator for the release of the sailors.

The sailors were originally taken hostage in the early morning of March 26, in the western Indian Ocean south of Seychelles. Their ship, the Naham 3 fishing vessel, was approached by gunfire before the pirates got onboard. The crew’s captain was killed that day and the remaining 28 were taken into custody. For a year and a half, the crew remained aboard their vessel before it sank and they were forced to transfer to land. More dangers faced them in the forest and desert than on the sea.

Libref, one of the hostages told a reporter that they became so hungry they ate rats. “We suffered a lot, we only ate rice, beans, flour, wheat, so we were forced to catch rats; we had to survive,” he stated. The men formed nets out of rope to capture rats and birds utilizing their rice as bait.

While traveling through the Somalian desert, they were continuously held at gunpoint and beaten with bamboo sticks. Two of the crew members passed away from illnesses during their years in captivity.

Antonio A. Libres Jr., one of the survivors, said, “Some of my crewmen kept saying, ‘We will never go home. We will die here,’…But me, no. I never gave up.” Mr. Libres seemed to be in shock that his captivators could be so cruel, “The pirates are worse than animals,” he stated. “You can’t understand these people.”

The 26 members of the Naham 3 endured the second longest pirate hostage situations to ever be handled, the longest situation carried on for five years. Due to these circumstances, shipping companies began employing armed guards to protect their ships from Somalian pirates. Sea patrols and EU naval forces have also increased their patrols, causing the number of pirate attacks to be greatly reduced.

Although, Oceans Beyond Piracy released a statement on Saturday, “Whilst there has not been a successful attack on a commercial vessel since 2012, there have been a number of attacks on fishing vessels and there remain a number of hostages still held in Somalia.” They feel it is pertinent to continue to address the problem of Somali pirates.

Libref told a journalist he didn’t have any plans for his future at the moment, he stated, “Now, to be free is enough…But my message is to the pirates: what they are doing is very bad. You capture people; you ask for money. What is the value of money?” He hopes to be reunited with his family this week, “We were treated like animals, so it feels good to be human again.”

“I’m full of happiness,” he told a reporter at the scene. “It was a surprise; we didn’t expect to be released … If you believe in God, hope is always there – we were in the hands of pirates yet there was hope, there was a miracle and we’re back in normality.”