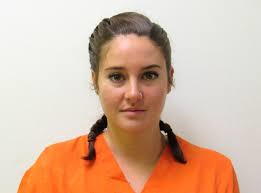 Actress Shaliene Woodley was arrested on Monday, October 10, during a peaceful protest of the Dakota access pipeline.

According to CNN, the pipeline would stretch from the “oil-rich” Bakken Formation from southeast into South Dakota but raised question among the locals as to whether it was truly a safe construction. Many believe that its establishment may not only negatively affect the surrounding environment but that it will also damage historically significant Native American tribal lands.

Support from thousands of people in over 200 Native American tribes have been extended to Standing Rock Sioux’s efforts to protect their lands, waters and sacred sites. Many others, including celebrities, such as Shaliene Woodley, have been vocal about their opposition to its production. Woodley was one of the only attendees of celebrity status to be involved in the protest on Monday.

Woodley was among 200 protestors in Morton County, North Dakota opposing the pipeline. Because of her celebrity status, however, she was arrested.

As the arrest occurred, Woodley streamed the event through Facebook Live. Since the video was posted, it has received 2.7 million views. In the video officers are recorded telling Woodley, “You are going to be placed under arrest for criminal trespassing.”

Woodley then asks, “Why am I being arrested but no one else down there is?” The officer responds by saying that others “pointed her out”.

Woodley can also be heard telling viewers in the video, “I don’t know if you guys just heard me, but I was walking back to my RV, which is right there so that we can go back to camp peacefully and they grabbed me by my jacket and said that I was not allowed to continue. And they had giant guns and batons and zip ties and they’re not letting me go.”

Woodley was released on Monday night from Morton County Jail. She was on a $500 bond and was charged with criminal trespass and engaging in a riot.

Since the controversy, the pipeline’s developer, Energy Transfer Partners, has released a statement defending the highly publicized, $3.7 billion project by stating that the project will help the United States be less dependent on foreign oil.

Naturally, many social media users have responded in outrage top the arrest. Woodley’s publicist responded to her fan’s feedback by telling the media that Woodley, “appreciates the outpouring of support, not only for her, but more importantly, for the continued fight against the construction of the Dakota Access Pipeline.”