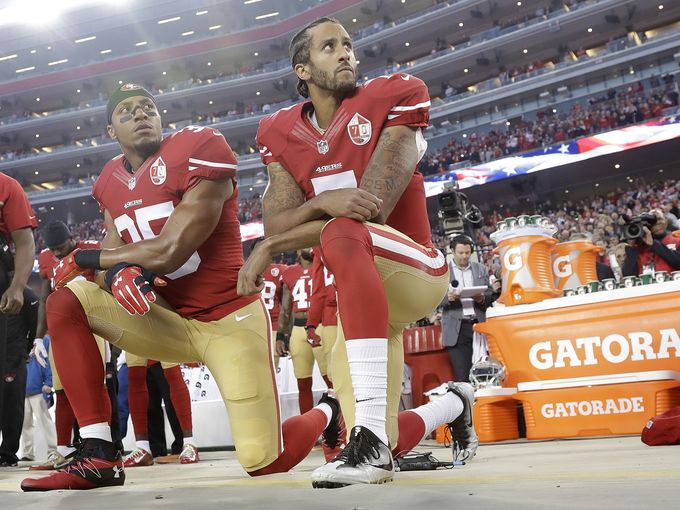 Colin Kaepernick, the backup quarterback for the San Francisco 49ers, is choosing to kneel during the national anthem. His decision to sit during the anthem is a protest of America’s treatment of African Americans and other minorities.

Kaepernick has faced backlash of people accusing him of being disrespectful and offensive. Iowa Rep. Steve King even went as far as to say Kaepernick’s protests [are] “activism that’s sympathetic to ISIS.”

However, a multitude of people have stood by Kaepernick’s decision. Megan Rapinoe, member of the U.S. Women’s Soccer team, also chose to kneel throughout the anthem in protest of LGBT rights, equal-pay, and police brutality. Numerous NFL players have joined the protest by taking a knee, raising their fists, or linking their arms during the national anthem.

Adrian Foster, a Running Back for the Miami Dolphins, has joined Colin Kaepernick in his protests and tweeted, “He has the right to choose not to stand. Just as you have the right to disagree with his stance.”

A large group of NFL players have also united against Kaepernick, stating that his protests are disrespecting the military and those who fought for the United States’ freedom. This argument also played a large part due to the games on September 11, where the national anthem was a memorial for the victims of the tragic disaster and those who lost their lives trying to save other people.

The dean of students and varsity football coach at Seneca Valley, Ron Butschle, told the Scout that, “As a father of a US Marine, I appreciate his freedom to express his opinion, but I do not support not standing for the national anthem because the national anthem expresses more than what’s going on with race relations in our country.”

In addition to the controversy over his protests, Colin Kaepernick’s jersey was the top selling jersey according to the NFL shop on September 7. Since then, his jersey has fallen from its no. 1 spot, but is still on the top selling list.

The back-up quarterback and his supporters are expected to continue to protest during the national anthem. In an interview with the NFL, Kaepernick said, “when there’s significant change and I feel like the flag represents what it’s supposed to represent in this country, I’ll stand.”