US student detained in North Korea speaks out 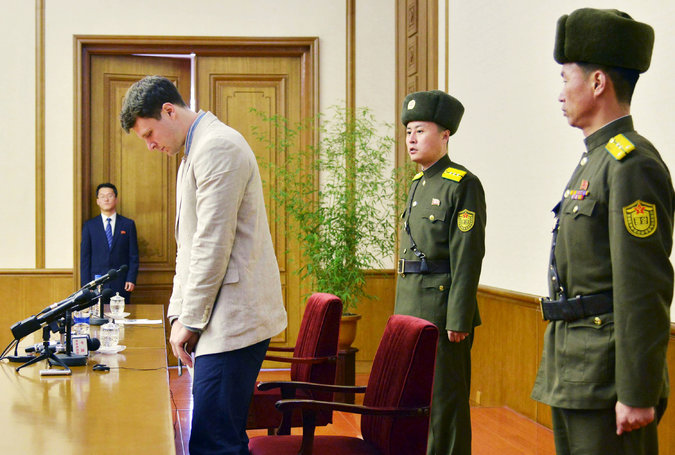 Otto Warmbier, an American college student detained in North Korea, spoke out in a video statement on Monday for the first time in the two months following his arrest.

According to CNN, Warmbier is accused of trying to steal a North Korean banner containing a political slogan that was hanging from the walls of his Pyongyang hotel while on a five-day trip organized by Young Pioneer Tours, a China-based tour company.

During the taped press conference in North Korea, Warmbier was accused of being encouraged to commit the “hostile act” by a purported member of an Ohio church, a secretive university organization and even the CIA.

As reported by CNN, Warmbier, appearing to read from a written statement, said, “I committed the crime of taking down a political slogan from the staff holding area of the Yanggakdo International Hotel… I never, never should have allowed myself to be lured by the United States administration to commit a crime in this country… I entirely beg you, the people and government of the DPRK, for your forgiveness. Please! I made the worst mistake of my life!”

It is not known whether or not he was forced to speak, and there is speculation that Warmbier’s detention may be intended to send a political message to the US and other world powers after tougher sanctions were imposed in the wake of North Korea’s recent nuclear test and rocket launch.

John Kirby, a US state department spokesman, told South Korea’s Yonhap news agency, “As a general practice, North Korea arrests and imprisons people for actions that would not give rise to arrests, let alone imprisonment, in the United States, and there’s little doubt that North Korea uses detention as a tool for propaganda purposes.”

According to The Guardian, Warmbier’s predicament is not the first time foreigners have been arrested for“crimes” against North Korea while visiting; other foreign citizens detained in North Korea have been forced to “confess” to crimes against the state and criticize their own governments, but have later retracted their statements after their release.

Travel to North Korea is currently legal, but the State Department strongly discourages United States citizens from visiting, especially considering that both countries remain in a technical state of war since the armistice that halted the 1950-53 Korean War.

Officials are hopeful that Warmbier’s statement will be enough to free him from his detention and return to his family in the United States.