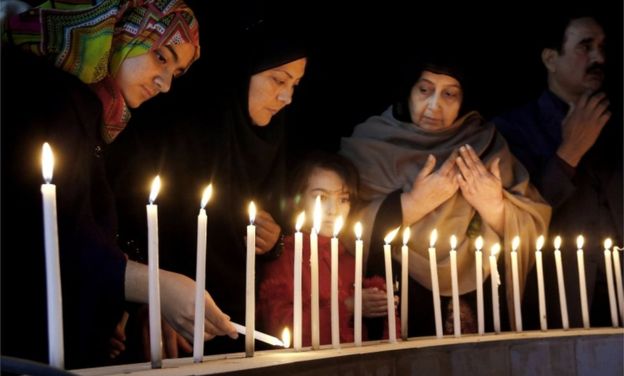 While one senior Pakistani Taliban commander took credit for the assault, an official spokesman of the Taliban then denied the commander’s claim and referred to the attack as “un-Islamic”. “Youth who are studying in non-military institutions, we consider them as builders of the future nation and we consider their safety and protection our duty,” read the statement.

As a response to the attack, Prime Minister Nawaz Sharif , said in a statement, “We are determined and resolved in our commitment to wipe out the menace of terrorism from our homeland.” However, many doubt his word to be true considering attacks like this are occurring even after the country went on a nationwide anti-terrorism movement.

While the government is disappointed some with their lack of ability to put a stop to such attacks, there were some civilian heroes that shined through this horrific event. Syed Hamid Husain, a chemistry teacher, was said to be seen pulling out a pistol and shooting at the gunmen so his students could flee. Unfortunately, Husein was eventually shot down as well, BBC News reported.

According to the AFP news agency, Zahoor Ahmed, a student, spoke about what he saw,”He was holding a pistol in his hand, then I saw a bullet hit him. I saw two militants were firing. I ran inside and then managed to flee by jumping over the back wall.”

Many other stories of the terrifying event have been shared by people who were there, Reuters reported.  One unnamed student, who laid Charsadda’s District Hospital, spoke to a news channel about how the militants made their way inside, “They came from behind and there was a big commotion. We were told by teachers to leave immediately. Some people hid in bathrooms.”

What adds insult to injury was the fact that, according to Reuters, about a year ago there was a massacre of 134 students in a school nearby.

General Asim Bajwa,Pakistan army spokesman, said, “The operation is over and the university has been cleared.”

Another security official who was supposedly close to the operation,  also stated that he saw the four gunmen dead and that the operation was now closed. Thankfully, the lives of many students, teachers, and innocent people are now safe as the situation has been handled. One can only hope that such catastrophe doesn’t strike the area again.