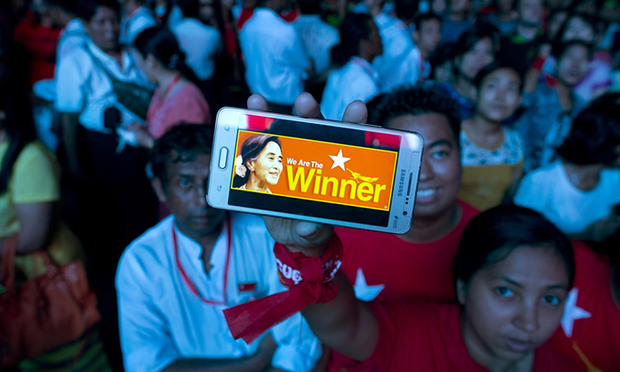 On Wednesday of last week, Aung San Suu Ki’s party (the National League for Democracy or NLD) dominated it’s opposition by declaring 90% of the vote in the current 47% seats declared, the BBC reported.

These results are an enormous win for the people as for the first time in 25 years they have had a free nationwide election. However, due to a constitution drafted by the military at the end of their rule, which extended to almost 50 years ago, Suu Ki herself cannot become President, but still, promises to lead the country in so other way, according to Reuters.

The opposition, also known as the Union Solidarity and Development Party (USDP), made comment on their great loss as a senior member spoke about what occurred, “Our USDP lost completely. The NLD has won. This is the fate of our country. Let them [the NLD] work. Aung San Suu Ki has to take responsibility now … we congratulate them anyway,” the Guardian said.

However, trouble flared up as the NLD claimed that the election commission was purposely delaying results so they could “play a trick”. Win Htien, an NLD spokesman, spoke to reporters after a party meeting, “It doesn’t make sense that they are releasing the results piece by piece. It shouldn’t be like that. They are trying to be crooked.”

The European Union states otherwise as they claim that the elections are well-monitored and that they’re being run very fairly, the Guardian says.

The chief observer, Alexander Graf Lambsdorff, talked to reporters about the subject, “On election day, EU observers reported that the voters of Myanmar turned out in large numbers and calmly casted their votes in a generally, well-run process. “The process went better than many expected beforehand,” he said with dozens of international observers, “reported very positively on the voting … with 95% rating the process a ‘good’ or ‘very good’.”

Despite the fact that the leader of the party, Suu Ki, cannot lead the party herself, the results of this election is a huge step forward for the people of Myanmar as the people begin to choose their future.