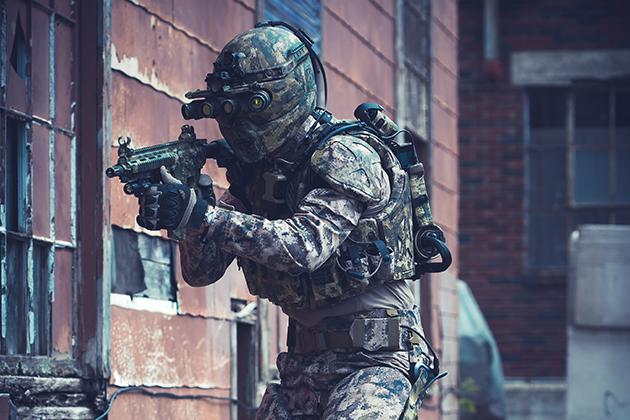 There is a suit of body armor in the making called the Tactical Assault Light Operator Suit, or TALOS. that will give the wearer essentially the qualities of Iron Man, minus the flying and repulsor beams.

The suits invention was inspired by a soldier who encountered a situation for which the suit was invented. This man was mortally wounded upon entrance to a building and it got Adm. Bill McRaven thinking, what can be done to make troops in that situation safer? The answer to that is TALOS.

The suit is will be able to provide protection from damage by resting in a liquid state,and it is also able to solidify on command which allows maximum protection for the user. The suit will presumably to be able to reduce impact of incoming damage by intelligently distributing weight across the body, provide sensor cues to soldiers to help reduce injuries, reapply energy to enhance efficient battery usage, and provide joint support to the wearer where it will be most needed. The suit is aimed to weigh a bit less than 400 lbs (180 kg) and be able to generate 12kW of energy for 12 hours.

There was hoped to be a functional generation one version of the suit in summer of 2014, but now that is looking more like July 2018. Even with that date in mind, many scientists and tech officials think that the technology needed to create a suit like this won’t exist until 2026.

With all those necessities, power generation is the biggest problem, a small and lightweight generator that can sustain the suit does not yet exist. Funding is also a big piece because the military plans to put $20 million dollars towards this a year since 2014 until 2018 for a grand total of $80 million dollars invested overall.