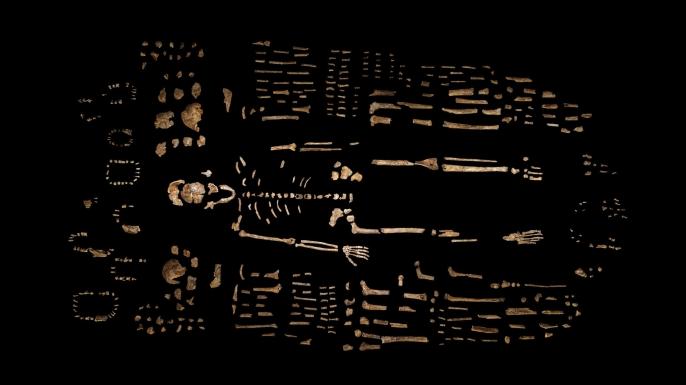 Ideas previously held to be fact regarding the evolution of humans must now be reexamined due to the discovery of an ancient ancestor some call the “missing link” between humans and early apes.

According to The New York Times, more than 1,550 fossil samples were collected at the site, making this discovery the largest for any hominim species in a single African site; even then, scientists believe that the recovered sample of fossils is only a fraction of what remains in the burial site. “With almost every bone in the body represented multiple times, Homo naledi is already practically the best-known fossil member of our lineage,” Dr. Lee R. Berger, an American paleoanthropologist who led the team of scientists in recovering the fossils, told The New York Times.

The discovery of the fossils is also monumental because the intentional depositing and burial of bodies was originally thought to be a ritual only practiced by modern humans.

Researchers are still trying to pinpoint exactly how old the fossils are, made difficult in part because of large deposits of sediment in the burial chamber and the absence of any nearby fauna remains. However, geologists believe the cave in which the fossils were found is no older than three million years, leading researchers to estimate that the species lived anywhere from 2.5 to 2.8 million years ago.

Dr. Berger explained that based on the most recent studies of the fossils’ anatomy, the species most likely had a brain no larger than an orange, as well as “contrasting anatomical features, including more modern-looking jaws, teeth, and feet.”

According to an interview conducted by NBC News, Steven Churchill, a human paleontologist at Duke University, called the fossils, “a very, very good and detailed look at a species of early human which seems to fill the gap”. He also told NBC, “We can rule out, for instance, that they weren’t the victims of carnivores, like lions or leopards, that might have dragged their bodies into the cave. We can tell that this wasn’t a social group that died through some sort of catastrophe in the cave.”

If anything can be taken away from this discovery, it’s that new information about the roots of humankind is still waiting to uncovered. As Dr. Berger puts it, “I do believe that the field of paleoanthropology had convinced itself, as much as 15 years ago, that we had found everything, that we were not going to make major discoveries and had this story of our origins figured out. I think many people quit exploring, and thought it was safer to conduct science inside a lab or behind a computer.”