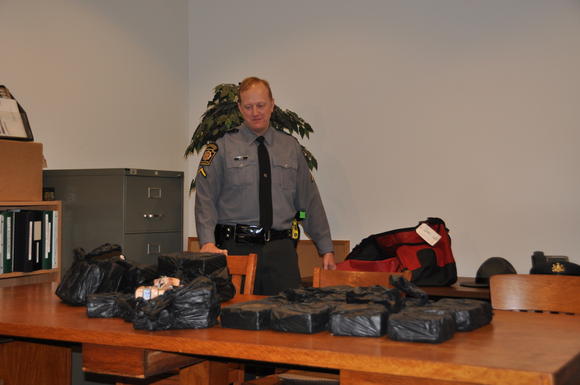 State police found much more than expected when an officer stopped a car on the Pennsylvania Turnpike for driving 14 miles over the posted speed limit. In Somerset County they seized $1 million worth of heroin after a traffic stop on the turnpike last Friday.

Law enforcement authorities are calling it one of the biggest drug busts on the turnpike in Somerset County history. Trooper Michael Volk stopped a Chevrolet Impala going 14 mph over the speed limit around 10 a.m. In the trunk were over 1,000 bricks of heroin.

District Attorney Lisa Lazzari-Strasiser told a WTAE reporter on Monday that “[They] believe this to be one of the largest seizures of a controlled substance ever in Somerset County. There’s some perception that the turnpike is just a thoroughfare, and because it was on the turnpike that it wasn’t intended for Somerset County,” she said. “These stamp bags, whatever city their ultimate destination would be, would have ended up here in some form or fashion either by somebody going to Pittsburgh to buy it or a smaller quantity for sale being delivered here.”

Warren Charles Green IV, 27, of Pittsburgh was traveling through Somerset Township at 79 mph. Troopers used a search warrant and a drug-sniffing dog. When they popped open the trunk, they found the heroin.

Volk said each heroin brick contained five bundles. Each bundle contained 10 stamp bags worth about $20 in street value. Investigators wouldn’t say where Green picked up the drugs or where he was headed. But it’s a good bet at least some of the drugs would end up in Somerset County, Lazzari-Strasiser said.

Green was arraigned by District Judge Sandra Stevanus of Confluence on a charge of possession with intent to deliver heroin. He was sent to the Somerset County Jail, where he was being held on $750,000 bond.