Carnival Cruise Turns Into a Crisis 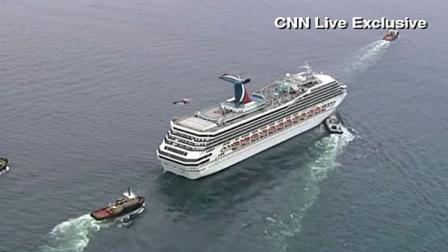 Several weeks ago thousands of tourists flocked to the sunny shores of Florida all with excitement in their eyes.  They were going to go on the Carnival Cruise ship Triumph, hoping to have the vacation of a lifetime abroad this majestic vessel.  These people were unknowingly about to embark on a trip which would turn from a week full of fun into a disaster.

After a few days out at sea the cruise ship started having several problems.  The cruise ship had been crippled by a fire.  The fire started with a leak in a fuel-oil return line which was connected to the ship’s No. 6 generator.  This fire stopped the ship in its tracks and then many problems ensued.

One of its many problems was that its sewage processing had malfunctioned.  Sewage began to run down the walls of the ship and overflow in the bathrooms.  The smell and the sight of this forced the guests to sleep outside on the ships decks or in the few halls that were clean.

To make this trip even worse for the passengers the ships engines had stopped working because of the fire and had forced the boat to come to a halt.  With no means of getting back to port on its own power the captain of the ship called for aid.

After more time transpired, help finally came in the form of several boats.  The boats attached towing cables to the stuck cruise ship and began the slow process of towing the ship to port.

Just as hope had come to the passengers the cable connecting the tow boats to the cruise broke and again the ship was stuck in the middle of the Gulf of Mexico.

Once more the ship tried to be towed to port and this time the connecting cable held firm.  After several extra days of being out at sea living in horrific conditions, the cruise ship was finally able to crawl into port.  Once the ship arrived in port the passengers were able to quickly disembark.

For having to go through all that they did, Carnival Cruise lines refunded the cost of that cruise, gave everyone a pass to use on another cruise equal to the amount that they spent on that cruise, and every guest was given 500 dollars for their troubles.

Despite having to live in their own sewage and being forced to stay outside the passengers were overall saying that the crew did an incredible job keeping people calm and going about their duties the best they could.