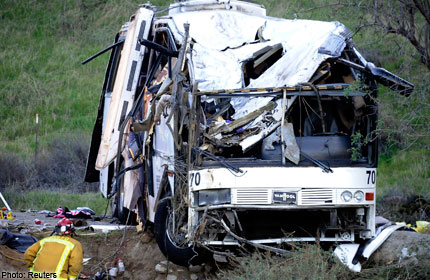 At least 7 people were killed and upwards of 30 were injured when a California tour bus driver lost control of the vehicle on a southern California mountain road, which then struck another vehicle and then smashed into a pickup truck.

The accident occurred on Sunday about 80 miles outside of Los Angeles.  The road was littered with debris and was quite a scary scene.  Caltrans spokeswoman Michelle Profant said the scene was shocking. “It’s really a mess up there with body parts,” she said.

The driver of the bus survived, and he said that he thought that the break mechanics of the vehicle failed while traveling down the steep mountain road.  Lettering on the bus indicated that it was operated by Scapadas Magicas LLC, a company based in National City, Calif. Federal transportation records show that the company is licensed to carry passengers for interstate travel and that it had no crashes in the past two years. A call to the company was not immediately returned.

Jordi Garcia, a manager for InterBus Tours, said his company ran Sunday’s trip. He told U-T San Diego that 38 people departed Tijuana at 5 a.m. for a day of skiing at Big Bear. “The information that we have is that the bus’ brakes failed and the accident occurred,” he said.

Patients were taken to area hospitals with injuries ranging from serious and life threatening to minor scratches.  This comes in the wake of a school bus crashing into an overpass carrying over 40 students.