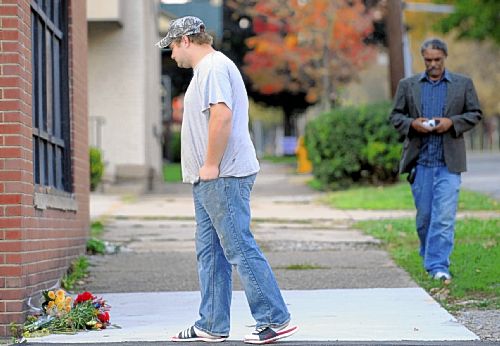 A friend of slain Washington and Jefferson football player Tim McNerney pauses Thursday at the scene of the killing across the street from campus.

A Washington and Jefferson College senior was attacked and killed in downtown Washington on October 4.

Tim McNerney, a 21-year-old football player for W & J, was walking back to campus around 2:30 a.m. with another student, Zach DeCiccio, when a group of men approached them. DeCiccio told police that he didn’t recognize the men, and that they attempted to rob him and McNerney, as written by The Post Gazette. According to DeCiccio, the group of attackers, which could have included as many as six men, tried to steal his phone and then began attacking him and McNerney.

DeCiccio “fled as fast as he could,” said Washington police Lieutenant Dan Stanek. DeCiccio lost track of McNerney (which was no fault of his own, according to investigators) through all of the confusion. When he arrived at his dorm, DeCiccio and his friends called campus police, who then alerted Washington police around 3 a.m.

Police searched the space on the corner of College and Maiden streets, based on information from DeCiccio. Investigators did not see any signs of the student. Around 4 a.m., however, friends returned to the area to search and found McNerney, unconscious, in front of Lombardi’s Auto Service. The area around the auto repair shop had already been searched, according to The Post Gazette. “We don’t know if he ran and was hiding. He had a head injury. It’s going to affect how you react,” Lt. Stanek said.

CPR was performed on McNerney, and he was taken to the Washington Hospital emergency room. He was pronounced dead at 4:42 a.m.

Hundreds of people assembled on the lawn of Burnett Center at Washington and Jefferson hours after McNerney was killed. Students held a candlelight vigil in remembrance, sharing stories about McNerney.

The funeral was held at Holy Sepulcher Church in Middlesex. More than 300 people were in attendance, according to TribLIVE.  A significant number of those people were McNerney’s high school and college football teammates. Washington and Jefferson football coach Mike Sirianni said after the funeral that “He was the kid on the team that everyone looked up to when things were going bad. It’s tragic. I hope this is the worst thing these 18 to 22 year olds have to deal with-especially with the way it happened.”

McNerney’s death is still being investigated. Police are attempting to find the location of his cell phone, which will hopefully guide investigators to potential suspects. In addition, Washington police have been viewing a surveillance video from the night of the attack. Unfortunately, the video shows multiple people around the place where the crime occurred. Washington police Chief Robert Lemons told TribLIVE, “We can’t judge anything off of it.”

In regards to the investigation, Lieutenant Stanek told The Post Gazette, “We’re not going to sleep.”