Mission to the Edge of Space: Success! 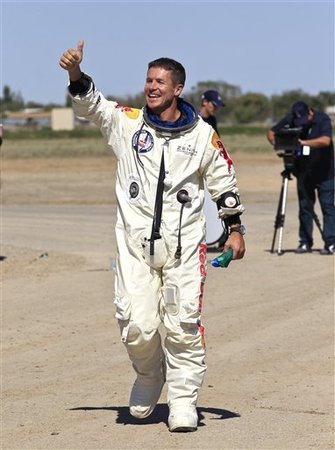 Felix Baumgartner, of Austria, gives a thumbs up to Mission Control staff, family, and friends after successfully jumping from a space capsule lifted by a helium balloon at a height of just over 128,000 feet above the Earth's surface, Sunday, Oct. 14, 2012, in Roswell, N.M.

It took Baumgartner 2 hours 21 minutes to reach the height and he reached speeds over 700 mph as he descended, according to The New York Times. The fall itself took a total of 9 minutes and 3 seconds from jump to landing, allowing Felix to touch the ground safely with a “perfect” landing. Once he landed he first kneeled down on one knee, and then stood up to celebrate the mission’s success.

When Felix was up in the pod getting ready to return to earth, he stated that he loved his family and he was, “Coming home now.” He also said that he wished everyone could see what he was seeing up there and was told “Start the cameras and our guardian angel will take care of you.”

On the way down Felix continued to be able to hear and talk to his mentor at the New Mexico station, Joseph Kittinger. At one point of the decent when he was going over 700 miles per hour, he stated that he was “dizzy” and his helmet shield was “fogging up.” These were only 2 minor issues that occurred, but were resolved with no worry.

“It was harder than I expected,” Baumgartner said after his big jump. “Trust me, when you stand up there on top of the world, you become so humble. It’s not about breaking records anymore. It’s not about getting scientific data. It’s all about coming home.”

Felix’s jump, sponsored by Red Bull, was an attempt to transcend human limits. The plan was to ascend to 120,000 feet in a stratospheric balloon and make a freefall jump back to the earth at unbelievable speeds, then parachuting to the ground. The success of this mission is going to help provide medical and scientific research.

The record that were broke were: First to break speed of sound in freefall, record hight in a stratospheric balloon, and several others.