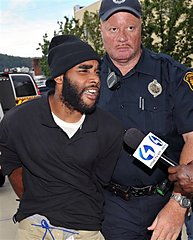 Klein Michael Thaxton, left, is lead into Pittsburgh Police headquarters after being apprehended without incident at Three Gateway Center in Pittsburgh, Friday Sept. 21, 2012. Thaxton held a businessman hostage inside the office building for more than five hours Friday, posting Facebook updates during the standoff, and surrendered to authorities without incident, police said.

On September 21, a man named Klein Michael Thaxton held a hostage in downtown Pittsburgh for approximately six hours. However, it isn’t the hostage predicament itself that has caused the most controversy in the aftermath of this situation. Instead, social media has been at the center of this debate after Thaxton received hundreds of comments on his Facebook page in the prime hours of negotiations.

Last Friday, Thaxton, age 22, chose the 3 Gateway building in Pittsburgh as a random target after waking up in a self-proclaimed “evil mood,” the Pittsburgh Post-Gazette reported.  He then entered the building with a hammer and a knife and made his way into Suite 1625. In that office, he found what he was searching for: a smart phone, computer, television, and an unsuspecting citizen, Charles W. Breitsman Jr.

Thaxton threatened Breitsman with a kitchen knife and then told the other employees of the office to leave, according to the Pittsburgh Post-Gazette. He began threatening to kill Breitsman and made him call 911.

Around 8:45 a.m., the situation took a bizarre turn. Thaxton began using Breitsman’s computer and iPhone to update his personal Facebook page. Some of his posts include “i cant take it no more im done bro,” “welln pops youll never have to woryy about me again…” and “i aint laughin rite now.” Thaxton continued to post similar things throughout the morning, despite that negotiations were occurring. There is also evidence that Thaxton may have been private messaging other Facebook users as well. Pittsburgh police Chief Nate Harper told Post-Gazette.com that the use of social media was “a distraction for negotiations.” However, Harper also said that Facebook may have distracted Thaxton from harming Breitsman.

Thaxton’s Facebook friends commented on his postings over 700 times. “Some were helpful, a few were ridiculous, and others were downright distasteful,” Harper stated. “When he saw that there were 700 comments on Facebook, he felt that people were concerned and he was important.” The Chief of police also told the media that the names of the commentators had been recorded, and that if anything were to happen, they could potentially be held responsible. Finally, Thaxton’s profile was shut down by police around 1 P.M. so that he could focus on negotiations.

Wells Morrison, a crisis negotiator with the F.B.I in Pittsburgh, told Post-Gazette.com that communicating on social networks while holding a hostage “can be very, very dangerous and can actually inflame the situation. You want the hostage-taker, or the barricaded subject, whatever it might be, you want his focus to be on law enforcement. You don’t want him to be distracted by phone calls, by text message, or by Facebook message.”

After nearly six hours, Thaxton released Mr. Breitsman and surrendered peacefully to the police. Breitsman was “quite shaken,” according to Harper, but he was unharmed.

This situation and other similar occurrences in the past few years have forced crisis negotiators to re-evaluate the way that they approach hostage situations.