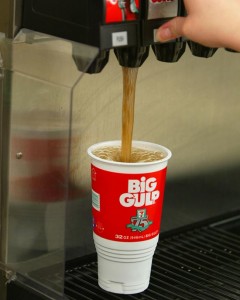 On Thursday, September 13, New York City’s Board of Health banned the sale of sugary drinks over 16 ounces.

The legislation, commonly called the “Big Gulp Ban”, passed 8-0 with one abstention and is the city’s latest attempt to fight obesity; in December 2006, the city was the first to ban trans fat and in January 2008, it forced restaurants to publish calorie counts on their menus.

The new law will ban sugary drinks over one pint in restaurants, food carts, delis, and concession stands at movie theaters, stadiums, and arenas. These places have six months to remove their super-sized drink options, or they will be fined $200.

“We believe that it will help save lives,” Mayor Michael Bloomberg said in his announcement of the ban. “This has nothing to do with banning your ability to buy… as many sugary drinks as you want, simply the size of the cup that can be used; it cannot be greater than 16 ounces.”

The CDC found last year that kids and teens get about 6.7 to 8.2 percent of their caloric intake from sugary drinks daily, while adults get about 5 to 8 percent. These drinks have been linked to poor diet, obesity and weight gain, and Type-2 Diabetes in adults.

The ban has a relatively limited scope; it doesn’t target diet sodas, unsweetened teas or coffees, drinks containing at least 50 percent milk or 70 percent juice (usually heavily sweetened with sugar), alcoholic beverages, or drinks sold in grocery stores or supermarkets. The ban also doesn’t limit the amount of drinks or the amount of refills someone can buy.

Still, many New Yorkers—60 percent, a New York Times poll found—disagree with the ban, saying it infringes on their right to make their own choices and is a grossly intrusive move. “The ban is at the point where it is an infringement of civil liberties,” Liz Hare, a scientific researcher in Queens, told the New York Times. “There are many other things that people do that aren’t healthy, so I think it’s a big overreach.”

Support for the ban does exist outside the Board of Health and the mayor, however. “The public health issue is so serious that any disincentive to consume sugary drinks in large amounts, I would support,” said Sharon Williams, a Brooklyn pastor, said in an interview with the Times. “I see it as a public health issue. I don’t see it as a civil liberties issue because if people want the option of having more soda at one time they can do that, they can buy two.”