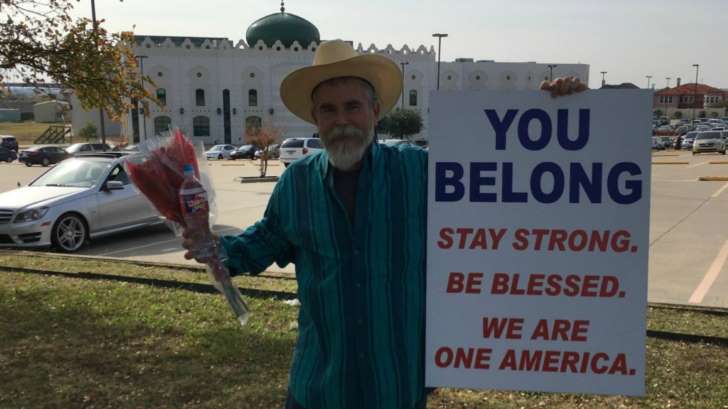 Over this past Thanksgiving weekend, one Texas man has had a message for Muslims, a group often persecuted and subject to racism and bigotry in our nation.

Standing alongside a busy road fifteen miles outside Dallas, the previously unidentified man held a sign saying, “You Belong. Stay Strong. Be Blessed. We are one America.” After a few days however, the man is in fact known to be 53 year-old, Justin Normand.

Normand has been seen outside the Islamic Center in Irving, Texas, wearing a cowboy hat and sporting his white beard. He told the Washington Post on Wednesday that he, “had no intention of drawing national attention” and that he just wanted to show his support for his Muslim neighbors.

In a Facebook video Normand posted Wednesday, he spoke on why he did what he did, saying, “I manage a sign shop, and so I had had the urge for a week or so to do this. Friday, I had a couple of spare hours in the afternoon, so I did. I made a sign, and I drove to the nearest mosque and stood out on the public sidewalk to share the peace with my neighbors. My marginalized, fearful, decent, targeted, Muslim neighbors.”

According to the Center, Normand has been seen outside last Friday, Saturday, and Sunday, connecting and showing his sympathy towards those following the Muslim faith.

Norman told MSN when asked about the sign, “It is the message — not me — that is transcendent. I just spoke what is on a lot of people’s minds.”

In fact, he must have truly sparked something on a lot of people’s minds as there has been an overwhelming support coming from social media for Normand those of Muslim faith. Normand said the outpouring of support has been very humbling, as he’s been a longtime activist.

In his video on Facebook, he spoke directly to those facing bigotry over their race or faith saying, “We are out here to help one another. And your community needs help.”

He went on to say, “I’m an American and — regardless of who’s here, Americans or immigrants — we’ve got to be here for one another. I’m just here because somebody’s got to speak up and say, You’re valued. You’re okay. You’re part of what’s going on here.”

Much of the fear Muslims in the U.S. are having comes from the recent election of Donald Trump. This is because during his campaign, Trump proposed a complete ban on Muslims entering into the U.S. The president-elect has in fact retracted this statement; however, the Council on American-Islamic Relations has reported a significant spike in reported anti-Islamic incidents across the country since the election.

Normand finished the video with, “This was about binding up the wounded. About showing compassion and empathy for the hurting and fearful among us. Or, in some Christian traditions, this was about washing my brother’s feet. This was about my religion, not theirs. And, it was about what I think I must do as an American when our way of life is threatened. Targeting people for their religion not only threatens our way of life, it is the polar opposite of our way of life.”