Children Talk About What Christmas Means to Them 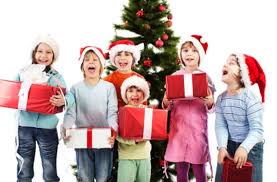 The Christmas season is rapidly approaching, and every person from nine to ninety is spreading their holiday cheer around to everyone they see.

From coloring and decorating Christmas cards to wearing the festive shirts day after day, the spirit these children have is heart-warming. I am also kept well-informed of what each child wants the most from Santa, and let’s just say Santa is in for a crazy night.

Just the other afternoon, as the kids munched on their snacks, I asked all of them what their all-time favorite thing about Christmas is, fully expecting to hear more about the presents they were anxiously waiting to see under their tree. Instead, I was bombarded with answers anyone would be overjoyed to hear.

A fourth grader named Molly told me her favorite thing about Christmas was “giving instead of getting, not having school, and seeing friends.”

A first grader named Owen shared that “my favorite thing about Christmas is spending time with my family.”

While right after Owen, a little Kindergartener named Audrey told me her favorite thing was “decorating the Christmas tree.”

Since I have grown up and have no little siblings or cousins around, I’ve missed seeing the way the kids light up when they talk about Christmas. Some are even as simple as “the food and not having homework,” which was said by a second grader named Lila.

Although there are many adults that still remain undoubtedly devoted to their Christmas spirit, there is nothing like the feeling you get when you tell a child that Santa is real. Seeing the excitement in their eyes when you tell them that if they are as good as they say they are, they will have a whole bunch of gifts underneath their tree.

Christmas is a time for celebrating, food, and spending time with everyone you love. Sometimes we might take things like this for granted, but it truly is the best part of the year. Take advice from sixth grader Alexis and third grader Zoey and spend your wonderful holiday “getting together with family,” and being thankful for everything we have in our lives.