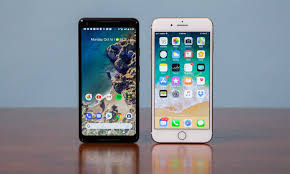 This fall season brings on a whole new world of technology which automatically comes with new competition between Apple, Google and Samsung.

People were overjoyed to hear about the release of the iPhone 8 that occurred just a few weeks ago. The new iPhone 8 features an all-new glass design, a water and dust resistant finish, wireless charging feature, retina HD displays, a new and improved camera and new finishes such as space gray, silver and gold.

Along with the arrival of the iPhone 8, the Pixel 2 has made its debut. This smartphone, made by Google, includes the “highest rated smartphone camera,” unlimited storage for photos, your own personal built in Google, multiple voice command abilities such as “okay Google take a selfie” or “okay Google play this on YouTube,” high definition stereo speakers, high resolution displays, water resistant design and black and white finishes.

These smartphone companies couldn’t just stop at one, though, and introduced the Samsung Galaxy S8. The Samsung Galaxy S8 features phones in numerous colors, amazing photos in low light and enhanced selfies, iris scanning for security purposing, a new feature called “Bixby” which identifies your commands and helps you complete them and even the ability to film 360 VR shots.

The iPhone 8 and the Pixel 2 have the biggest competition between the crowds. The debate reigns on as people compare features, processing and overall which phone is generally the best.

In regards to design, they both look pretty similar to their prior year model. Due to the iPhones all glass surface the phone is likely to crack, but the plastic-coated aluminum body of the Pixel 2 just doesn’t hold up when compared to the looks of the iPhone 8. The battery power between the two was tested by a continuous video playback on airplane mode. The iPhone 8 lasted for fourteen hours and twelve minutes while the Pixel 2 lasted thirteen hours and twenty-eight minutes.

“If you want the best camera you can get on a smartphone then you buy a Pixel,” says a commenter on the subject. Another states, “the iPhone 8 produces brighter and more vibrant colors, and it’s Portrait mode not only looks more natural, you can preview the effect before you shoot.”

It all comes down to which one you choose.