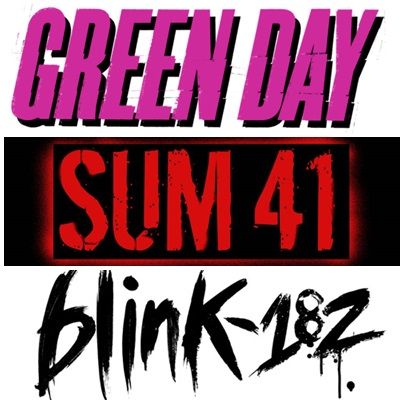 If you grew up in the 2000’s. there is no way you could avoid the popular bands such as Green Day, Blink 182, and Sum 41. These bands have each been off the main stream music sound since the early 2010’s and all decided to make a comeback this year.

I don’t call these bands pop punk because they mainly out grew the genre. They have alternative influence while still maintaining their punk roots.

Blink 182  hasn’t released a major album since 2003 and hasn’t release a record since 2011. After guitarist and “crappy vocalist” Tom DeLonge left to do other projects, they brought in band friend Matt Skiba to play all of Tom’s parts.

Blink did not make any secrets that they were recording an album.  Bassist Mark Hoppus and drummer Travis Barker posted something about the album on their social media almost every day. They released the hit song “Bored to Death” in late April and the studio album, titled California, was released on July 1. The album brought back their original sound with the instruments but a new sound with Skiba’s voice.

The album has received a ton of praise and was a great way for them to come back into the mainstream. It also kicked off their summer tour through out all of North America.

Green Day’s last release was the Uno, Dos and Tre triple album release. Billie, Mike, and Tre for some reason thought they could release 3 albums in a 2 year time span. They did, but the outcome was very little commercial success and some of their worst songs since their 2000 album Warning. They haven’t released a single thing since 2013, but in early 2016, band front man, Billie Joe Armstrong, tweeted “my mission for 2016? to destroy the phrase pop-punk forever.” This tweet foreshadowed new music in the future.

Sure enough, on August 11, they release the song “Bang Bang.” This song received the most success in sales and is now their opener on their European tour. It’s a fast tune with the lyrics taking you inside the mind of a shooter. They then released whole album on October 7, the album is titled Revolution Radio. Other popular songs on the LP are “Still Breathing”, “Ordinary World”, and title track “Revolution Radio”.

Based on feedback and other reviews, Green Day has made a great comeback album and is considered a redemption from their last release.

Sum 41 has been off the map since 2011 after their self produced studio album Screaming Bloody Murder had the lowest commercial sales out of all of their records. After the album debuted, singer Deryck Whibley almost died from his alcohol addiction. He went to rehab and has been sober ever since they started to record their new record called “13 voices” two years ago.

They released the music video to their first single off the album, “Fake my Own Death”, on June 28 and would release the full record on October 7 (the same day Green Day released Revolution Radio). Other songs include “War”, which is clearly about his struggles with alcohol, and “God Save Us All (Death to Pop)” which is saying pop basically isn’t music.

Last song worth mention is “G** D*** I’m Dead Again”; this song has some of the best guitar work ever done in a Punk record, but the song is facing some controversy. One of the guitar licks is very similar to Joe Walsh’s solo on Hotel California by the Eagles.

Each of these bands expressed this isn’t their last album, or last time they are going to tour together. There will be more punk.