Everyone should see “The Big Short” 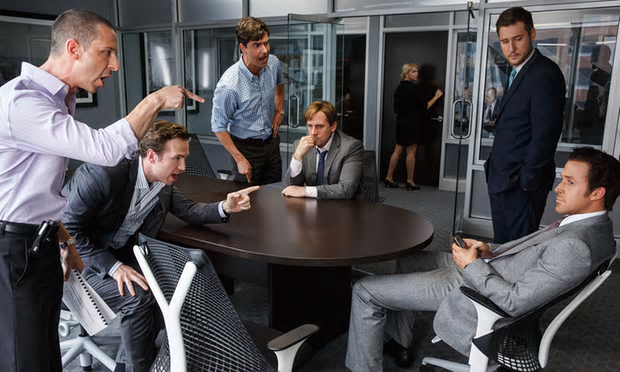 Winning an Oscar for Best Adapted Screenplay, “The Big Short” directed by Adam McKay and produced by Dede Gardner, Jeremy Kleiner, Arnon Milchan, and Brad Pitt  has become one of the year’s best movies and one every person in the world should watch.

“The Big Short” is about the House Market Crash that caused millions of people to go homeless in 2008. It takes the complex workings of high finance and banking then make it fun for the audience to watch. Keeping a quick, pumping pace that keeps you on the edge of your seat and makes you feel as if there is a lot of action. In reality, most of the movie consists of people talking about things the majority if the population doesn’t understand.

However, if you’re worried that you won’t be able to keep up with the confusing banking terms and economics, worry not. The movie does a fantastic job of explaining all these things using celebrities like Margot Robbie and Selena Gomez (who play themselves) to keep it fun, interesting, and educational.

But even so, why is it that everyone should watch this movie? Well, down to its roots, it tells the story of the fraud and corruption that the banks of Wall St. committed that caused the crash to happen. It exposes the criminal actions of these people in a fun and comprehensive way.

This serves as a perfect medium for the “regular Joe” to understand what happened in 2008 as well as inform young adults and teenagers about the mistakes of the past. Not only that, but it serves as a warning of the coming future considering the movie makes a point to let you know that only one man was arrested for all this and that the banks are doing what they did before once again. What is even more worrying is that the banks are even bigger then they were before making the impact will be even larger. If millions were affected the first time, how many will be affected this time?

With election season upon us, “The Big Short” serves as an easy way to become educated about the topic of Wall St. and how they affect the country. I strongly encourage every voter to watch this movie so that they can make an appropriate decision on who will be the person to lead the U.S. Movie goers and voters must ask: what will they do to stop the inevitable economic crisis of the coming future?

Hopefully, after grasping an understanding of the topic through the movie, all voters will choose a leader that will put restrictions on Wall St. and prevent a disaster.