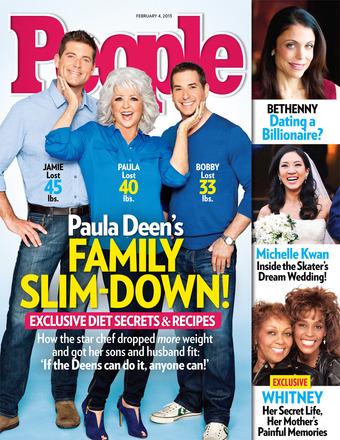 The world renown Food Network star, Paula Deen, is known for her overuse of butter and anything else high in fat and cholesterol. But ever since announcing her Type 2 Diabetes diagnosis last year, Paula Deen has been on the ‘health grind’. In addition to her newly-devoted fitness regime and profound way of cutting the calories in all of her dishes, her family has committed to standing by her every step of the way- and even managed to lose some of their own excess weight in the meantime.

Deen’s sons, Bobby and Jamie, have lost a total of 78 pounds while husband, Michael Groover, has lost 60. Adding the forty pounds Paula herself has cut from her body, the family has lost a total of 178 pounds.

Alongside her diagnosis came a bundle of controversy when Deen revealed she had Diabetes and also verified that she was going to be a part of a new partnership with Novo Nordisk, the creater of a Diabetes drug. Her condition was kept under the radar for quite some time, even while she continued to promote her butter and fat-filled recipes.

Despite setbacks with media controversy, Deen seems to be doing well on her new health kick. With the whole Deen family backing her up, and of course a little help from all of her fans, Deen is on the right track to a much healthier lifestyle.