Bill O’Reilly and Jon Stewart Face Off at GWU 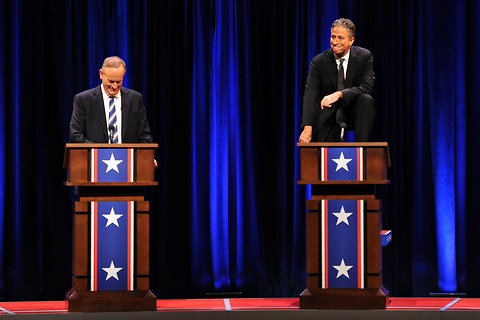 Bill O’Reilly, left, and Jon Stewart onstage at “The Rumble in the Air-Conditioned Auditorium,” at George Washington University on Saturday.

The debate was held at George Washington University in Washington, DC, not on television.  Those who wanted to watch it live had the option of paying $4.95 to have it live streamed to their computer. It was said that so many people attempted to watch the live streaming debate that it crashed at one point and not everybody had the ability to watch it.

When O’Reilly was asked about this, he apologized to those who couldn’t watch it and said, “Hundreds of thousands of people tried to get on, so the server crashed. ”  He then sarcastically added, “If anybody wants the $4.95 back, we’ll send it to you.”   Part of the money raised from this cost will be donated to charity.  The debate was a great success as the two shared a spirited debate, but still didn’t hold back.  Both O’Reilly and Stewart got some good shots in on each other, and despite their differing views, they seemed to have fun.

The idea for this debate sparked after Jon Stewart’s many appearances on O’Reilly’s show.  These appearances always created great television with two very intelligent, articulate men like these.  After a few appearances on the show over the years, the demand for a debate was there, and both stars agreed that it would be a great idea.  There was yelling, laughing, but most of all, a genuine exchange of viewpoints from both sides, and it was all done in a very respectful manner.

Some of the issues that were debated included topics like income redistribution, funding of public television, social security, who is to blame for the country’s economy, security inside Libya, and the Iraq and Afghanistan wars.  It wasn’t the typical debate format, as both parties took a more relaxed and funny approach to it, providing the audience with great laughs.  Stewart even said “I can see why Obama did badly in the debate, the altitude is rough up here”.  Jokes like this were a common theme at the debate and really made it a fun, but educated debate.

Despite their political views, Stewart, a Liberal, and O’Reilly, a staunch conservative,  put their differences on issues aside, and hosted a great event that not only provided Americans with a breath of fresh air from the Vice-Presidential and Presidential debates of late, but also put on an event that benefited a charity. Regardless of political views, all can agree that Stewart and O’Reilly did a great job of once again bringing politics and comedy together in great harmony.